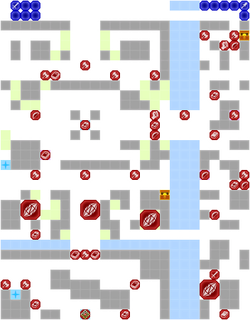 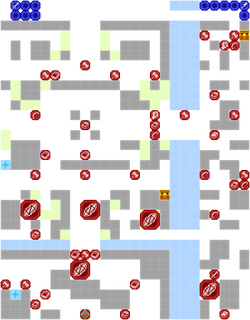 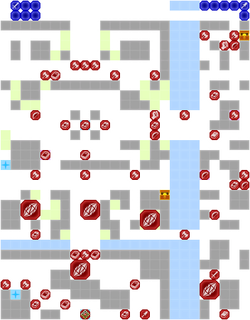 Byleth, Dimitri, and 10 others

Chapter script
[view]
Our Chosen Paths is the twenty-first chapter of the Azure Moon route, accessed when Byleth chooses the Blue Lions house.

With Fort Merceus captured, the final battle between the Kingdom's forces and Empire's army draws closer. Dimitri attempts to parley with Edelgard to end the war peacefully and come to terms, but the Emperor refuses. Handing back the dagger she dropped five years prior, Dimitri vows to storm Enbarr at the end of the month to put her ambitions to an end.

The battle proves to be a long, grueling battle against the full force of the Adrestian Empire, lead by Hubert. Despite sending some of the empire's best soldiers and even unleashing Demonic Beasts onto the Kingdom army, they are ultimately unable to stop them and Hubert is killed.

With the capital seized, Dimitri orders his knights to secure the outside, but to not kill anyone who has surrendered. All that remains for Byleth and Dimitri is to finally face Edelgard to end the war once and for all.

Note that this chapter marks the final in-game month of the Azure Moon route. All features are available up until 8/23, the final day to visit the Monastery, play any Auxiliary battles, Rest, or have Seminars. The 17th is the final Tutoring session as well. Certifications and Marketplace will still be accessible on the 30th, but the hard once per week Certification is still in effect on the final day.

Because this is the final month and the first to two chapter battles, it is important to stock up your allies with whatever weapons they may need. Keeping a few items for forging may be helpful as you're are allowed to use the Marketplace features on the preparation screen of the next chapter, but otherwise, feel free to cash out your wallet as much as possible as it does not carry over into subsequent playthroughs of the game.

The battle begins with your army split into two groups on the top of the map, half placed on the upper left with Byleth, the other half with Dimitri on the upper right. The map is a long battle comprised of many Master Class enemy units, strong Demonic Beasts, and Magic Orb/Balistas. Range is important in this map as a result as your allies will be bombarded each turn by all sorts of enemies, especially on Hard Mode. Players can choose to have the two remain separate and move downward before merging to take down Hubert, though this is not entirely necessary as having the two together on the left side of the map will help once the Demonic Beast reinforcements arrive. If the right side is traversed, there are plenty of chests to pick up useful items for the battle and for the next one so there are incentives to keep the army split. Otherwise, have most of the units head west to merge. Though at the very least, taking on the enemy units directly in front of Dimitri's force not only nets some experience, but also there is a Tomahawk in the chest next to them.

The Demonic Beasts of this chapter are mainly flying beasts so Ashe, Shamir, Felix, and Cyril with bows or Annette, Mercedes and Flayn with Excalibur are useful in quickly killing them. Using Gambits and breaking their shields will provide some useful forging material as well which can help for final preparations of the Endgame of the Azure Moon route if needing to do repairs or last minute forging.

Magic will be a constant problem on the map as several enemy mages carry Meteor and use the aforementioned Magic Orb on the left side of the map. Dedue/Gilbert will still be useful physical walls on the map due to the plethora of physical units, but they are an easy target for the high ranged mages on the map so caution is advised if deploying them. Baiting out the Mages with Meteor with high Resistance units like Ingrid if she is a Falcon Knight or Mercedes/Annette/Flayn/Hanneman are a safe way to reduce the danger zones on the map while eliminating the Balista/Magic Orb units will not only remove further damage to your units, but also allows you to use them to your advantage in the rest of the battle.

Walking with Dorothea/Manuela and Flayn/Seteth to the Opera House and the church respectively, both located near the center-left of the map, rewards the player with a battalion of Opera Co. Volunteers/Macuil Evil Repelling Co. at the conclusion of the mission.

Hubert himself is not entirely problematic, though he can hit hard with his Miasma or Luna with Fiendish Blow and your allies who attack adjacent to him will lose avoid. He carries Commander, has infinite uses of his spells, and has both Authority and Reason Level 5 equipped. He becomes even more dangerous when low on health with Defiant Magic. Hubert may hit hard, but he is highly vulnerable to range, namely a well trained Ashe/Shamir who both can learn Curved Shot and can outrange him as a Sniper or Bow Knight, thus safely poking him or perhaps ending the battle with a well timed Critical Hit.