Outset of a Power Struggle

Outset of a Power Struggle 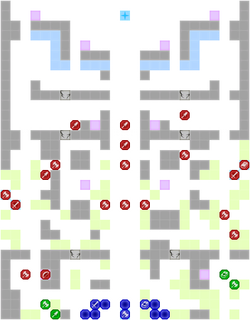 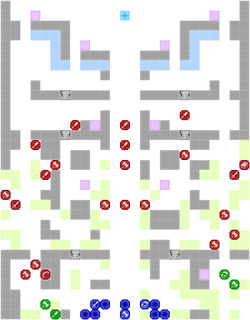 争覇の幕開け, The Beginning of Conquest

Byleth, Edelgard, Hubert and 7 others

Chapter script
[view]
“If you dare walk this path with me, take your first step. It's now or never!”
—Edelgard

Outset of a Power Struggle is the twelfth chapter of Fire Emblem: Three Houses for players who chose to lead the Black Eagles and chose to side with Edelgard in the previous chapter.

After Byleth sides with Edelgard over Rhea following the skirmish in the Holy Tomb, Hubert teleports the party away and they all find a way into an Imperial provisional camp to discuss the next course of action. Flayn, however, leaves to protect Garreg Mach alongside the Church of Seiros. Edelgard confronts her house on the matter of the revelations regarding archbishop Rhea and the Church of Seiros and asks if they are willing to fight alongside her, to which they all comply. Within the camp, many have conflicting feelings about the turn of events and contemplate their various situations. Additionally, two Imperial commanders have been added into the assault, Ladislava, Edelgard's head of personal guard and Randolph, Caspar's uncle.

After preparations have been made Edelgard directs her army in an assault on the Monastery. While the fight is intense, Edelgard is ultimately triumphant in her assault, forcing Rhea and the Knights of Seiros out of Garreg Mach Monastery. However, before she is forced to retreat she collapses part of the monastery on Byleth.

By choosing the Crimson Flower path, Byleth has permanently gained access to Edelgard and Hubert for the rest of the route.

The initial assault is predominately against Armor Knights, with Mercenaries and Pegasus Knights strewn around. If a unit goes too far down the center road an ambush will spring, spawning various powerful units.

The main objective of the map is to defeat the initial three enemy commanders: Seteth, Flayn, and Gilbert. The boss, Rhea, can only be reached once these three have been defeated.

When viewing the map, you will notice the top third of the map north of Seteth is dark. Rhea, Cyril, Catherine, two demonic beasts, and a large amount of enemies are hiding here. We’ll come back to this later.

While it isn’t necessary to keep the various Allied units alive (Ladislava, Randolph, etc.) they work well at drawing enemy attacks away from your units. Use this to your advantage by healing them and keeping them alive as long as possible. No bonuses are earned or lost if they are defeated.

If you recruited Leonie and Lindhardt is still alive, it’s recommended to use Byleth to defeat both Seteth and Flayn. By doing this, the paralogue in Part Two with Leonie and Lindhardt will be available,  whereas if these characters are defeated by any other personnel, the paralogue will not be available. This strategy will take the approach where Byleth will defeat Seteth and Flayn. We will also keep in mind the 10 turn limit to prevent reinforcements from appearing so long as you defeat Seteth, Flayn, and Gilbert within the 10 turns.

Start by using the Stride gambit on Byleth and moving him to the right side of the map. You may want to use your dancer’s first turn by using the dance ability on Byleth to speed up how quickly Byleth can make it to the right side. On the left side, have your units deployed so you can eliminate the archer at the ballista and one of the armored knights during your first turn (Petra with an Armorslayer or Rapier sword can typically get the job done especially as an Assassin with a hit critical hit rate; an Evasion Ring and the Axebreaker support ability helps even more). While not required, consider having your bow units on the left side of the map where they can assist in taking out the Pegasus Knights that will approach from the north and that have a high avoid rate (Curved Shot from an archer will help). Also consider having your long-range mage on the left side as well as they can usually double Gilbert with a spell which may be enough to defeat him in one turn. If you have units that cannot safely attack enemies during turns, have them break the spots in walls that are weak to give you alternate routes to enemies. The ballista and onager can also be used for this.

For the enemies in the center of the map (three armored knights), draw them out by having your tank (usually Edelgard) go to the edge of their movement range but do not cross the dark grey tiles on the ground. If any of your characters do this, a large amount of enemy reinforcements will appear in the center of the map and Seteth will make his approach. Keep a mage nearby (like Hubert) to assist in killing off the armored knights. The remainder of your units can accompany Byleth to the right and your personnel to the left. After your tank kills off the Armored Knights, leave them behind until all three generals (Seteth, Gilbert, Flayn) are defeated. Hold off on using Edelgard’s new gambit.

The left side units shouldn’t have too much trouble with the enemies. Use tactics like having your high avoid character aggro enemies into tiles with Thicket defense and have the remainder of your team finish them off. Again, Gilbert should be easily defeated by a long-range mage and anyone wielding armor piercing weapons.

The right side enemies also aren’t too troublesome for higher level (25+) personnel either. Flayn can usually be defeated by Byleth with one strike of the Sword of the Creator combat art, Sublime Heaven. If she happens to survive by having Miracle activate, use Divine Pulse, take at least one additional action with another character (move, use a healing spell, etc.) then try Sublime Heaven again. Eventually she will fall without Miracle activating. After she is defeated, the Death Knight and an additional allied unit will join your side but cannot be controlled.

At this point, only Seteth should remain of the three generals. His Ochain Shield will prevent any critical hits. Move your right side group towards the center of the map and then use a unit with similar or higher Attack Speed (AS) to aggro Seteth near this group (the Death Knight may move into Seteth's attack range thereby negating the need to do this). During your next turn, you can use gambits to weaken him before attempting Sublime Heaven with Byleth or if you have a dancer nearby, two hits from Sublime Heaven should finish him off (if not, a hit from one or two gambits will weaken him enough to where one or two hits using Sublime Heaven will defeat him).

Once all three generals are defeated, Rhea will appear and the back third of the map will fill with enemies including Catherine and Cyril. Two Demonic Beasts will also appear in the center of the map near the central gate. Several enemies, including Catherine and Cyril, will start to approach your squad but they are far enough away that you should be able to finish off the two demonic beasts with gambits and other powerful attacks before they are within range of your squad. Try to save Sword of the Creator uses for Catherine, Cyril, and Rhea.

When Catherine, Cyril, and other enemies are nearby, blast them with a hit from Edelgard’s gambit that is five spaces wide and two deep. Edelgard has a higher hit rate with gambits so if this misses, move units near these enemies to activate a gambit boost. Catherine isn’t overly difficult to defeat (one hit with Sublime Heaven will usually do the trick, if not, use bows or even a ballista to finish the job) but Cyril has very high avoid even after being hit with a gambit. If you happened to have mastered Caspar as a Grappler (or someone else on your squad) a hit with combat art Fierce Iron Fist may be able to finish Cyril off quickly. While fighting these enemies, consider having some of your other squad members use other entrances to the back of the map and start eliminating some of the remaining enemies that have yet to approach.

Once the demonic beasts, Catherine, and Cyril are all defeated, the remainder of the battle is pretty straightforward. Use your squad wisely to defeat all other enemies before fighting Rhea.

Rhea is not a difficult boss although she does have a decent critical hit rate (around 20%). She can counterattack from any distance so keep this in mind when choosing who to use. Your tank can usually attack her and survive one or two critical hits. Also, one or two hits with Sublime Heaven will do the trick. Most gambits have a low hit rate but your higher Charm character can typically connect, especially with a gambit boost from your other nearby characters that within attack range.