Ovis is one of the twelve Deadlords, and appears in Fire Emblem: Genealogy of the Holy War and Fire Emblem Awakening.

In Fire Emblem: Genealogy of the Holy War, little is mentioned about the Deadlords, but they are all fought in the Final Chapter near Belhalla and eventually defeated, including Ovis himself. Ovis is not fought in Fire Emblem: Thracia 776.

Ovis is easily the strongest magic-based Deadlord, as he appears as an almighty Sage wielding Wind Magic. It is highly recommended to attack him with characters such as Shannan with the Balmung, as the latter is capable of defeating him before he can even make a move. Alternatively, the Silence Staff may be used against him, which will drastically reduce his difficulty level. Otherwise, the sadistical combination of Pursuit, Adept, Charge, good Speed and a high HP pool can result in Ovis spam-casting Tornado until your unit dies.

The Deadlords' names are Latin words for the animals of the Chinese zodiac. The zodiac's eighth sign can be translated as "sheep," which in Latin is ovis.

Acht, Ovis' Japanese name, is the Dutch and German word for the number 8. 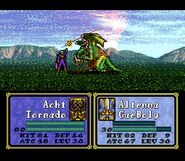 Ovis killing Altena in Genealogy of the Holy War.