Tiger
[view]
“Mwahaha! Come here so I can taste you!”
— Pain

Pain (デス Desu, lit. Death) is a boss character from Fire Emblem: Radiant Dawn. Together with his younger twin Agony, he leads a band of laguz bandits in the desert near the Daein border.

Just like his younger twin brother, attacking him while he is not transformed makes him a cakewalk, but when he is transformed he is a serious challenge. Some of your weaker members like Meg and Edward are most likely to die in a single blow. Letting Nolan, Aran or Sothe pull him and then finish him off with ranged attacks. Magic is most effective! 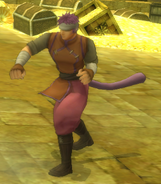 Pain's battle model as an untransformed Tiger in Radiant Dawn.