Chapter 7: Lefcandith Gauntlet [Joins in Chapter 14: Land of Sorrow (Shadow Dragon and the Blade of Light)

[view]
“Being family allows you to forgive some things you couldn’t otherwise. Though I understand it also makes other things unforgivable.”
—Palla in Fire Emblem Echoes: Shadows of Valentia

Palla (パオラ Paora, Paola in the Japanese version and Paula in the Italian version) is a playable character in Fire Emblem: Shadow Dragon and the Blade of Light, Fire Emblem Gaiden, Fire Emblem: Mystery of the Emblem and their remakes. She is 23 years old in Fire Emblem Echoes: Shadows of Valentia.

Palla is the older sister of Catria and Est, and raised them after their parents died. Loyal to Princess Minerva of Macedon, she was part of the Whitewings, an elite Pegasus squad from Macedon. The Whitewings wanted to join the Altean army alongside Minerva, but when Prince Michalis heard this, he locked his and Minerva's younger sister Maria, in jail to prevent Minerva and the sisters from turning on him. When Marth eventually rescued Maria, Palla and her sister Catria set off to look for Marth and Minerva. When they found them, they joined the Altean army. During the war, Palla developed a crush on Abel.

In Fire Emblem Gaiden, Palla and Catria journeyed to Zofia in search of the kidnapped Est, eventually joining with Celica's army to help them save Est and to aid Celica on her journey.

In Fire Emblem: Mystery of the Emblem, a rebellion against Minerva's rule broke out in Macedon and Palla was forced to flee, meeting up with Julian and learning that Lena and Maria were captured by Gharnef. She joined Marth's army in order to save Minerva and Maria. After the war, she pushed aside her feelings for Abel and continued serving Macedon.

In Tokyo Mirage Sessions ♯FE, Palla appears in Chapter 6 during the second trial to acquire the Opera of Light: Fire Emblem as one of three boss Mirages. She fights alongside Jagen and Ogma.

As the elder sister of the three Whitewings from Archanea, Palla is mild-mannered and down to earth, always caring about her sisters. However, she also has a stubborn side and absolutely will not budge after a decision is made.

Palla, and her sisters Catria and Est, are all Pegasus Knights recruited in Celica's route. When considering all of the Pegasus Knights in Gaiden, Palla is strong and durable but slow for a Pegasus Knight. Catria and Est are both strong all rounders whose balance between Speed and Strength usually makes them the most offensively potent, and Clair is very agile but fragile.

Although all 3 Pegasus Knight sisters are good units, Palla will likely wind up the weakest of the three if you choose to level all of them. Palla joins at the same time as Catria, and although she starts 3 levels above her sister, Catria actually starts out significantly stronger in most stats. When she closes the 3 level gap, the only stat Palla is likely to have more of is HP, and it is the only stat she is likely to beat her sisters at in the long run. By the late game, she will end up with a few more points of Strength and Defense than Catria, but Catria will blow her away in every other stat. While Est will statistically beat Palla in everything but HP, she does have the drawback of late recruitment and starting at a low level, meaning that Palla's early availability may prove to be of more use than Est's statistical superiority. Palla unfortunately has no way to fix her very poor Speed, which is the main thing that holds her back. Her Promotion to Falcon Knight doesn't fix the problem as the class has a low base speed of 5.

In all, Palla is still a good unit. She can tank decently well, still benefits from great mobility that ignores terrain, and does good damage due to her high Strength. However, where her sisters will probably Double Attack everything they encounter, Palla will have a lot more trouble doing so, particularly later in the game.

Palla has some of the highest base stats of any unit in the entire game, despite joining as obscenely early as Chapter 3. She also joins at level 10, ripe for an immediate promotion into the Dracoknight, which is almost indisputably the best class in the entire game. Although many people choose not to use her because of her low speed growth, they often fail to take into account that she is only 4 points away from the speed cap at base, and will average capped speed naturally as a Dracoknight even if promoted immediately (and this is not taking into account the potential she has for starshard abuse). Her base weapon level means that at join time, she'll be able to wield virtually every single lance in the game, and in conjunction with her 10 flying movement on promotion, she'll prove to be easily one of your strongest units.

*In her appearance in Chapter 7, she uses a Silver Lance instead of the Dragonpike she is recruited with in Chapter 14.

Palla has stiff competition with her younger sister Catria, who has a higher growth rate in speed, as a considerably higher growth rate in luck, and no shabby stats across the board. However, Palla's growth rate in resistance is slightly higher, and is more likely to nab her a boost in resistance, despite not being likely, which can make her more sturdy against magical attacks. However, her luck rating is still very low, and using a Goddess Icon or two is a good idea when using Palla. Palla also generally does not have an overflow of speed, and thus does not have to worry about the low speed cap of the Dracoknight class, whereas Catria would rather reclass into a Paladin, Swordmaster, or Sniper for that higher speed cap. Overall, Palla has some key disadvantages over her younger sister, Catria, but has enough to distinguish herself as a Dracoknight.

Palla joins as one of the strongest units in the game. Starting in Chapter 3, she is capable of wielding Silver Lances and easily makes ruin of most enemies early on in the game. She also joins at level 10 in a chapter which contains a Master Seal, making her a prime candidate for an optional early promotion. While on the game's higher difficulties, she'll often find herself slightly less capable than Catria in the near endgame due to the low speed growth she possesses, her amazing base speed prevents this from being too much of an issue (and even then, this is discluding just how many statboosters the player recieves in New Mystery). Overall, Palla's fantastic base stats, solid growth rates, and early access to Silver Lances makes her a standout unit on any difficulty.

Eldest Whitewing
Eldest of three sisters who are pegasus knights for Macedon. Appears in Fire Emblem: Mystery of the Emblem.

Elder Sister
The war left this once self-assured knight’s heart in knots; but Palla still worked diligently at rebuilding Macedon.

Elder Sister
Though her feelings pained her, Palla put them aside and diligently continued her work.

“I am at your bidding.”
—Palla's DLC recruitment quote in Awakening
“Show us your strength!”
—Palla's battle quote in Tokyo Mirage Sessions ♯FE

“Oh, good! I was hoping we'd find you. You really saved us back on the coast. We've managed to dig up some additional information since then. Turns out our sister Est is being held by a thief named Grieth. Your strength is beyond reproach. That much is certain... If you're headed to Grieth's citadel, perhaps you'd let us join you?”
—Palla's recruitment conversation
“I hear you're headed to Grieth's citadel as well. Would you mind if we traveled together?”
—Palla's recruitment conversation after talking to Catria

Enemy does One or No Damage

Palla is illustrated in the trading card game Fire Emblem Cipher with the following cards:

Concept artwork of Palla from Echoes: Shadows of Valentia.

Artwork of Palla from The Complete.

Artwork of Palla from the original Trading Card Game.

DLC artwork of Palla by Homare from Fire Emblem Awakening. 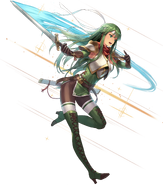 Artwork of Palla along with her two sisters from The Complete.

An illustration of Palla (along with Catria and Est) that appears in the Fire Emblem Memorial Book Archanea Chronicle.

Palla as a Falcon Knight in the One Hundred Songs of Heroes Karuta set.

Palla and Catria as they appear in Shadow Dragon and the Blade of Light manga adaptation.

Palla as a level 10 Pegasus Knight in the TCG

Palla as a level 20 Dragon Knight in the TCG.

Promotional card of Palla as a level 10 Pegasus Knight in the TCG.

Palla as a Pegasus Knight in Fire Emblem 0 (Cipher).

Palla as a Pegasus Knight in Fire Emblem 0 (Cipher).

Palla as a Falcon Knight in Fire Emblem 0 (Cipher).

Palla as she appears in Tokyo Mirage Sessions ♯FE.

Palla's portrait in Shadow Dragon and the Blade of Light.

Palla's portrait in Mystery of the Emblem.

Palla's portrait in New Mystery of the Emblem. 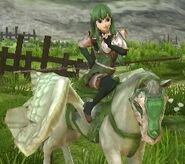 Palla's battle model as a Pegasus Knight in Echoes: Shadows of Valentia. 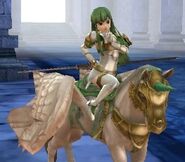