Falcon Knight
[view]
“Annand, are you still fool enough to stay loyal to the queen? She knows it's over for her... Well, I'll become the top ranking Falcon Knight once you're gone. Nothing personal.”
—Pamela, in a conversation with Annand

Pamela is an enemy character from Fire Emblem: Genealogy of the Holy War. She is one of the Four Heavenly Knights of Silesse and trained alongside Annand.

Pamela betrays her country to serve under Daccar and aids him in his rebellion against Queen Lahna. This was done out of Pamela's greed, and powerlust. She works together with Duke Andrey of Yngvi and the Beige Ritter to kill Annand and capture Silesse Castle. Afterwards, Pamela receives orders to retake Tófa Castle from Sigurd's forces, but she perishes in battle against them.

Pamela's dialogue within the game showcases her possessing an extremely cruel personality; gloating over Annand's death to her family and friends, as well as fully supporting Daccar's cruel actions such as leaving Myos's force out to die.

Pamela believed that Lahna and Lewyn were both too weak to be fit rulers for Silesse. She had a desire to be the highest ranked Heavenly Knight of Silesia and thus sought to kill Annand. Pamela got along well with her fellow conspirators and was known as a fierce warrior.

Apart from possessing slightly higher HP, Pamela's stats are identical to the other Falcon Knight enemy commander encountered in Chapter 4, Díthorba. As she will later attempt to lay siege to Tófa Castle, do remember not to leave it defenseless, and position either Midayle or Jamke around said castle to defend against her impending onslaught.

If Silesse Castle is captured prior to Pamela's defeat, her AI will change, and she will, alongside her pegasus knight squad, move to attack said castle.

Pamela appears in this manga. However, in stark contrast to her game portrayal as a psychotic individual with no morals, Pamela is instead portrayed as being honorable instead, driven more by self-hate and jealousy than mere envy and power hunger.

Unlike her game counterpart, who gleefully taunts Lewyn and Erinys on Annand's death, the manga version of Pamela shows remorse for helping Andorey kill Annand, and even respectfully delivers her untouched corpse to Queen Lahna instead of beheading her and then presenting Annand's head to her former Queen. While she does taunt Erinys when they eventually meet each other, but she is not as cruel as her game counterpart, and it's hinted that she may have provoked Erinys to get herself killed in battle.

Last but not least, Pamela's looks are greatly different in the manga. Principally, her hair is much shorter and of a light-blue tone.

Pamela is illustrated in the trading card game with the following cards: 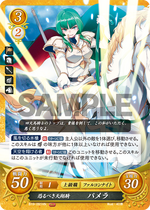 The artwork of the Four Heavenly Knights in Genealogy of the Holy War.

Artwork of Pamela in Fire Emblem 0 (Cipher) by 40hara.

Pamela, as she appears in the first series of the TCG as a Level 1 Falcon Knight.

Pamela as a Falcon Knight in Fire Emblem 0 (Cipher).