Jessica Gee
[view]
“Despite our history, I never hated mankind. The exalt proved your race's worth. Until man-spawn slaughtered my people and put my warren to ruin, that is.”
—Panne to Libra in a Support Conversation.

Panne (Palne in the non-English European versions) is a playable character from Fire Emblem Awakening.

Panne is a noble beast warrior unattached to any kingdom. She is also the last survivor of the Taguel after a genocide by an unknown group of humans, though she does not have any real motivation to continue her species. She is also the mother of Yarne, and can be a potential mother of Morgan as well. In her A Support with Ricken, Panne mentions that a long time ago, her mother used to tell her the tale of a certain tribal leader, and that was back when taguel ruled the world and lived in an earthly paradise. However, as Panne mentioned in her A Support with Lon'qu, a man razed her village and murdered her kin. Just before she died, her mother told Panne that she mustn't hate all humans. She said there were good men as well as wicked, and she was never to forget it. But still that, Panne had it hate in humans. In the Japanese version of her support with Henry, she mentions that she had an unnamed younger brother, who was also murdered, that Henry reminds her greatly of. However, in all versions of her support with Yarne, Panne claims she never met any other taguel due to their extinction happening in her infancy.

Panne appears first during the attempted assassination of Emmeryn. It is later revealed in her support with Henry that it was he who informed her of Emmeryn's impending assassination, and what brought her to Emmeryn that night. After fighting to protect Emmeryn in the battle, Panne speaks to her. Emmeryn tries to apologize to Panne for the genocide of her people, which leaves her confused since she had nothing to do with the treatment of her people. However, she is touched, and chooses to believe in Emmeryn, ultimately deciding to join Chrom's army.

After the war, if Panne is not married, she vanishes. Rumors spoke that Panne went back to her home alone, others believed that she found fellow Taguel survivors.

Panne is a cool woman with a strong sense of duty and pride for her people. Panne distrusts humans for the genocide of her people, leaving her as the last Taguel. As such, she refers to any human who has not earned her respect as "man-spawn".

Akin to rabbits, she enjoys carrots, though she's very picky about her food and loathes potatoes in particular. However, during her support conversation with Robin, they note that Taguel taste buds may be different than a human's (or may not work at all) when Panne appears to be indifferent to the carrot stew they made earlier that tasted like "yesterday's dishwater". Due to her large ears, she has a very acute sense of hearing and can even tell if someone is nervous from their heartbeats. Because Panne is not human, she exhibits extraordinary displays of athletic ability.

Panne is somewhat of a "wild" person as she never grew up with human customs. Because of this, she is clueless to society's norms and may come off as boorish such as in her support with Stahl, as while the two were gathering fruit, an accident occurs and Panne proceeds to clean Stahl's face by licking it, causing him to recoil. She is the fastest eater in the army.

Panne is a unique character, introducing the Taguel class of shapeshifting units to the Fire Emblem series. As a Taguel, she boasts excellent Strength, Speed and Skill growths, alongside a guaranteed HP boost with every level-up. Her Luck and Resistance growths are, on the contrary, fairly average, while her Defence is solid. Panne joins with one Beaststone in her inventory, one that needs to last until the next Beaststone can be obtained after defeating Mustafa. After the completion of Chapter 12, Panne will have an unlimited supply to buy Beaststones.

Panne possesses the Even Rhythm skill, which will cause her Accuracy and Avoid to go up a bit on even turns. Once reaches Level 15, she gains the Beastbane skill, allowing her to function as an effective horse killer.

Overall, Panne is a good frontline unit, with superb growths across the board, alongside decent defenses as long as she has a Beaststone on hand. She does have flaws, however, including her lack of 2-range weapons as a Taguel. Furthermore, Panne will always need to be careful around Beast Killer-wielding units, as she retains her beast unit status outside of her Taguel class. It is recommended to reclass Panne as much as possible to build up her skill pool before reverting her into a Taguel, allowing her to reap the benefits of her acquired skills to further improve her battle prowess.

Panne's two reclassing options are Thief and Wyvern Rider. It should be noted that in these classes, Panne will retain her Beast unit status. As a Thief, Panne's growths are very similar to that of her Taguel class, allowing her to benefit from the same Strength, Speed, Skill and HP growths as before. Her Defence growth drops slightly in this class, but this should not pose too much of a problem, as this is compensated for by her other stats. Locktouch is not a particularly useful skill for her to acquire, as both Gaius and Anna fill the role of lockpicking more than sufficiently. The Movement +1 skill, on the other hand, is a great one for her to obtain, as it expands her movement range, allowing her to close in on enemies with ease. As an Assassin, while Panne retains the same set of stat growths, she does, however, stand to benefit from the two skills that this class has to offer. Given Panne's high Skill, Lethality is not a bad attack skill for her to learn, as she will be able to activate it occasionally to deliver fatal blows to her foes, although it's not reliable. The Pass skill lets her aid in swarm tactics or escape from enemy crowd situations. As a Trickster, Panne can potentially learn the Lucky 7 skill, which gives her a great boost to her Hit and Avoid rates for the first few turns of any given battle, perfect for most parley skirmishes and Risen map spawns. The Acrobat skill grants her free movement on all terrain, which is useful for traversing desert and forested maps.

As a Wyvern Rider and a Wyvern Lord, Panne needs to be wary of her triple unit status (flying, dragon, and beast), and will thus need to be handled with caution. As a Wyvern Lord, Panne stands to learn the Quick Burn skill, which makes her nimble for the first few turns of a given battle, an effect that will diminish gradually with each passing turn. She can learn the Swordbreaker and Lancebreaker skills from the Wyvern Lord and Griffon Rider classes respectively, both of which are fantastic for establishing her as an offensive unit. It should be noted that if Yarne's father does not have access to the Wyvern Rider class set, Yarne should inherit a skill from this class set, as he will not inherit said class set from Panne.

For StreetPass play, Panne can prove to be marginally effective, given her unexpectedly high defenses coupled with high Skill and Speed (as an Assassin). However, those who use her as one of the three units to choose from may find themselves keeping her as a last resort when they lead because of her limited skill availability, especially if they are using units like Chrom. That being true, Panne can still be a very effective anti-rider unit, whether she is using bows with high Skill (Assassin), Beastbane (Taguel), or a Beast Killer (Wyvern Lord).

Proud Taguel
The last of the taguel, a rabbit-like race. Calm, sensible, and self-reliant.

Panne - Proud Taguel
Once the fighting was done, Panne vanished. Some say she returned to live in her warren alone; others claim she eventually found fellow taguel survivors.

Panne and Robin
Many wrote of Robin's legendary exploits, but accounts of his origins and character varied. Scholars, poets, and bards agreed on one thing alone—he loved his wife, Panne, above all else.

Panne and Donnel
Donnel returned to his tiny village and built a happy life with his mother and his wife, Panne. This new "warren" had more than enough nature to please any taguel, and her heart found a home at last.

Panne and Frederick
As Ylisse's new knight captain, Frederick took charge of keeping the peace and training new recruits. His wife, Panne, showed no interest in his work but gradually learned to enjoy human life.

Panne and Gaius
Gaius never lost his sweet tooth, though he ultimately returned to less savory enterprises. Amazingly, Panne dirtied her hands right along with her husband, using her keen night vision to expedite jobs.

Panne and Gregor
After the war, Gregor sank into a life of excess. It was his wife, Panne, who broke the cycle and invited him to see her warren, after which the two traveled the land as mercenaries.

Panne and Henry
Henry settled down with Panne and turned out to be a surprisingly good father. Their newborn son was far more taguel than human and would come to be known as his dying race's last hope.

Panne and Kellam
Once the fighting was done, Panne vanished. Some say she returned to her warren alone; others claim she found fellow taguel survivors. Her husband's name has been lost to history.

Panne and Libra
Many an unfortunate child found joy in the small orphanage Libra and his wife built after the war. The children loved Libra like a mother and often pestered Panne to transform and give them bunny rides.

Panne and Lon'qu
Lon'qu returned to Regna Ferox and served as Basilio's right-hand man. Panne had no problems with the cold winters and would often forage for rare snow herbs used in steaming pots of tea.

Panne and Ricken
While continuing to study magic, Ricken realized how childish some of his actions had been. Panne took him to the wilds, reminding him he was a small part of a greater plan.

Panne and Stahl
Stahl continued his service as an Ylissean knight and led crucial missions across the realm. His scatterbrained gaffes sometimes got on Panne's nerves, but the two still made a happy life together.

Panne and Vaike
Vaike returned to the streets that raised him and was welcomed as a hero and brother to all. Still, the people were even fonder of Panne and she, in turn, grew to love the town's wild and woolly nature.

Panne and Virion
Virion returned home to Rosanne, where he was labeled a traitor and a coward, or else ignored entirely. But his wife Panne's dedication did much to bring him back into good standing among his people.

Panne is illustrated in the trading card game Fire Emblem Cipher with the following cards: 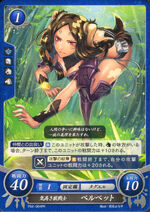 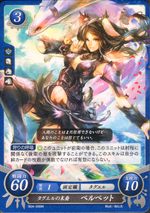 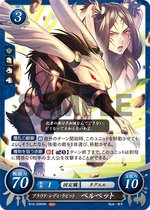 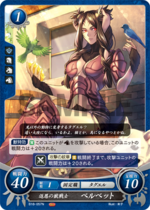 Panné is a specific kind of crushed velvet, composed of a blend of viscose and silk.

Velvet, Panne's Japanese name, comes from the eponymous fabric, known for its plush, smooth texture. She may also be named after the Velveteen Rabbit.