The Parthia (パルティア Parutia) is a legendary Bow that appears in the Archanea Series of the Fire Emblem franchise, alongside Fire Emblem Awakening. One of three regalia weapons of Archanea, this bow serves as the counterpart to the sword Mercurius and the lance Gradivus.

The Parthia was stolen by Adrah, and used to conquer the continent of Archanea. Upon the founding of the Kingdom of Archanea, the Parthia was dubbed a Regalia and subsequently passed down through descending generations of Archanean royalty.

During the War of Darkness, Nyna presents Parthia to Marth in Chapter 12 (Chapter 10 in Book 1 of Mystery of the Emblem) after he successfully wrests control over the royal palace of Archanea from Volzhin's forces.

During the War of Heroes, Parthia appears in the possession of Jeorge in Chapter 8. Speaking to him with Gordin will convince him to harden his resolve to defect to Marth's army.

Parthia is an ancient country that once existed in the southwestern part of Asia. Becoming a powerful empire around the 2nd century BCE, it collapsed in the 3rd century CE. The Parthians were known to be very skilled in mounted archery and famous for the "Parthian Shot", a tactic in which mounted archers would turn their bodies back during a retreat to shoot pursuing enemies.

Parthia, as it appears in the ninth series of the TCG. 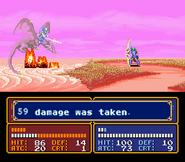 Parthia being used in Mystery of the Emblem. 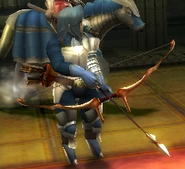 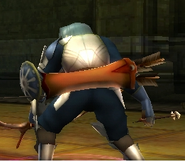 The quiver of Parthia, as it is depicted attached to Virion's back in Awakening.

In-game model of the Parthia from Heroes.