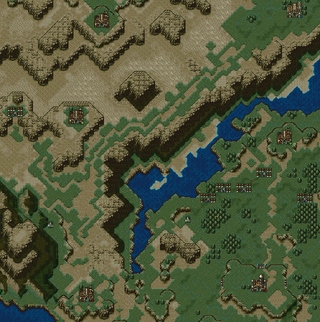 Chapter script
[view]
“Word of the first victory of Prince Seliph and his liberation army quickly spreads far and wide, inspiring courage anew in the Empire's victims. Still more uprisings erupt across Jugdral, but once again, precious few are properly organized and are easily crushed, and the death toll climbs ever higher... Leonster, a kingdom in the Thracian Peninsula... Prince Leif, the son of Quan, had raised an army with the aid of the knight Finn, but they have suffered a devastating loss before King Bloom's vast hordes and are stranded in hostile ground. Before Seliph lies the Aed Desert, ruled by the Loptrian Kutuzov from the Aed Shrine; the oasis city of Dahna, governed by the ex-merchant Bramsel and the captain of his sellsword army, Javarro; and Melgen Castle, guarded by Prince Ishtore and the renowned General Liza. King Bloom himself, the son of the late Duke Reptor, awaits at the capital city of Ulster with his niece, the mage Tine. In Ribaut, Seliph and the warriors of his liberation army now prepare themselves to embark on a journey and come to the aid of their allies in far-away Leonster. Each warrior sets aside their worries as, under Seliph's leadership, they prepare for the new battle on their horizon.”

Passing the Desert is Chapter 7 of Fire Emblem: Genealogy of the Holy War, occurs at Darna.

You get many new characters in this chapter, the first 4 being Patty, Shannan, Leif, and Nanna. Finn also returns on this map. If he was paired up, he will come with an Iron Lance but if left unpaired, he will keep his first generation equipment.

Up where Seliph starts, you should have him and Lana or Julia start heading up to where Shannan and Patty are; they are being chased by Dark Mages and Sword Fighters, and they will not last long. Make sure to have Shannan speak to Patty to get the Balmung.

Down below, Leif, Nanna and Finn should hold back the enemies. Have Leif visit the village down toward the right so he can get a Speed Ring. If Leif has the Armor Cutter through inheritance, use it on the approaching Armor Knights. Fee should also go down there too to help. The armor knights never stop spawning until the General is killed, so a good way to get Leif and Nanna many level ups is to weaken the general by using the Lands Sword from range and letting him run away.

After Seliph reaches Shannan and takes the castle, hurry down to the village on the far left. The village contains a Shield Ring.

When Ishtore comes out along with Liza, have sturdy units lure some of the enemies out while staying out of range of Liza and Ishtore, who has Bolting. Make sure to take advantage of Seliph's leadership star bonus. Once Liza is close enough, have your units kill her. Clear the rest of the enemies, then have your fastest characters move down toward Ishtore. Be sure to take out the ballista. Have Arthur move down to where the two neutral Sword fighters are but not in front of them as the next turn they will attack.

Tine will arrive on the field as an enemy. She may go for Leif's group and she can end up getting herself into trouble. Along with Tine, the mage trio Vampa, Eliu and Fetra will arrive. Have Leif and everyone sit in a village for extra evasion. Take out the mage trio as they approach, and avoid letting them surround a single unit, as they have the Triangle Attack.

Ares will come out from his castle along with Javarro, but he will join you instead. Move Ares out of the way but keep him in range of one enemy so he can wipe out most of them with Mystletainn. If you eliminate Javarro's squad but fail to kill him, he will attempt to return to Dahna and will return to the field with a second full squad. After Bramsel is killed, make sure to have Ares visit the castle he came out of to get Ares' companion Lene/Laylea.

The last step should be getting rid of Bloom, who isn't too difficult if you have a strong unit deal with him.