Thief
[view]
“Sir, where do you think the imperial troops get all their gold? They steal it from the villagers! I’m just tryin’ to take it back from them!”
—Patty, explaining her actions to Seliph in Genealogy of the Holy War

Patty is a playable character from Fire Emblem: Genealogy of the Holy War. She is the daughter of Brigid, and her brother is Febail. She is also the cousin of Lana and Lester.

Her Substitute character is Daisy.

Patty grew up in an orphanage in Conote, and resorted to thievery to support the orphans whom she had taken under her wing. She discovers a shrine that is rumoured to be filled with treasures, and there she is caught by Shannan when she attempted to steal the holy sword Balmung from the Aed Shrine. She refuses to give the sword back to him and runs mischievously. Though, she eventually returns his weapon when they need to fight back other looters, and she confirms that he is the true Shannan.

Accounts in the official side story tell that, when Patty was a child, she became friends of a girl called Lina, who later turned member of a local rebellion force, and she was the one who convinced Patty to go to Aed Shrine, under the promise of finding gold to support the orphanage. On the way, Patty's friend was mortally wounded, resulting on Patty traveling alone to the shrine alone under the promise of finishing the mission in her honor. She managed to infiltrate the hideout by disguising herself and poisoning the guards' drinks.

When she meets Seliph for the first time, she is excited to see him, and asks to join his party, in exchange of her skills of stealing money for his troops. He is hesitant to accept a thief in the army, but Patty snaps back at him explaining that she strategically gets money from imperial soldiers and that she needed to do that her whole life, to survive. Seliph then apologizes for judging Patty, and accepts her in the party. She gives the brave sword to Seliph as a thanks, which he finds adorable.

She is later able to recruit her brother Febail in Chapter 8, and she gets disappointed that he is fighting for the enemy side. She manages to succesfully convince him to fight for the rebels though. In chapter 9, it's revealed that Patty and Febail eventually discovered, through Lewyn, that their true mother is Brigid. They had no idea that their were members of the noble house of Yngvi, and instead grew up believing that they were simple orphans. In their conversation, both siblings consider looking after her when the war is over.

Patty's future will vary depending on who she is paired with. She will inherit Yngvi and become its next ruler if her brother Febail fell in battle. Though, if her brother is alive and Patty is unpaired, she will return with him to assist in ruling the dukedom. Should Patty be paired with Seliph, she will marry him instead, and will became the empress of Grannvale. If she romances Ares, she will be the queen consort of Agustria instead. If she marries Lewyn's son, she can become Queen of Silesse. She will be the Queen of Isaach if she is paired with Shannan. In another scenario, if she marries Leif, she will become Queen of Thracia. And finally, should she marry Oifey, she will become the next high duchess of Chalphy.

Patty is a high-spirited and headstrong young lady, who has shouldered several heavy responsibilities throughout the course of her life, with the main one being that of looking after orphans in the orphanage she was raised in. She is, however, cheerful as she gladly faces all adversities that come her way.

Patty is also rather possessive over items which she deems to be her own, as seen from her refusal to return the Balmung to Shannan. Patty also appears to be a very good cook, as can be seen in her lovers' conversation with Seliph or Shannan in the Final Chapter, where she formulates a homemade stamina drink to boost her lover's morale in the impending battle. She is also shows to admire both boys, fangirling over them upon meeting both for the first time. She is also shown to have a teasing relationship with Lester and which they friendly pester each other.

Please note that just like Leif and Altena, Patty inherits the equipment of her father, because Febail inherits Yewfelle from Brigid.

* Dependent on the identity of Patty's father.

Playing the primary role of a Thief in the second generation, Patty is very useful for obtaining and redistributing Gold, but suffers from several issues combat-wise. Those issues primarily being that she is stuck with C-rank Swords until Promotion, and she does not inherit any skills from her mother. This means she will be entirely reliant upon her father to provide combat skills. She will lack Pursuit until Promotion unless her father provides it, and many of her best potential fathers do not have it. This often leaves Patty in a situation where she is your weakest unit until she can Promote. Once she does Promote, though, she becomes a very potent killer. If her Father didn't give her Pursuit, the ability almost doubles her combat prowess, and going from C-rank to A-rank swords is likewise a big upgrade. Her Promotion also takes her Movement up to 7, higher than any other foot units (nevertheless still less than any mounted unit).

Patty will likely have to steal kills in order to remain useful, since she will have a hard time gaining experience otherwise. Abusing the Sleep Sword she comes with can allow her to cheat through the arena fairly easily, as one trigger of it renders arena enemies impotent. This can be an expensive practice, though, as the Sleep Sword is costly to repair. It is recommended to have Patty obtain a Magic Sword, as this will allow her to safely attack most enemies from a range, while still stealing their Gold, without fear of reprisal. Giving Patty the Elite Ring will also help her out tremendously, as she is heavily reliant on her Promotion for combat competency and it will drastically increase her rate of EXP acquisition.

Any parent pairing that gives Patty the Charge skill should take caution. The skill can put her at risk since she has a high chance of triggering it but also has a high chance of being an underdog while exchanging blows. It is best that if she does have the skill, she tries to initiate combat with units that cannot counterattack her.

If the player chooses Chulainn as the father, Patty's combat will not be hampered despite his inability to pass Pursuit on to Patty, as his Holy Blood allows her to wield B-rank Swords, giving her access to the superior Hero Sword among others.

It should be noted that, just as with Dew, pairing Patty up can make leveling her up much easier. Patty and her lover will be able to give money to each other, and Patty will gain 10 EXP every time she does this, allowing her to gain levels easily and in complete safety, though the process is tedious.

In Chapter 7, Shannan may speak to Patty, and he will receive both the Balmung and 100 love points with her.

In Chapter 7, after the Aed Shrine is captured, Patty may speak to Seliph, and he will receive a Hero Sword and 100 love points with her.

In Chapter 8, if Patty speaks to Febail when he is still any enemy unit, she can recruit him.

In Chapter 9, Febail may speak to Patty, and she will gain one point of luck.

In Chapter 9, if neither Coirpre nor Patty has lovers, Patty may speak to him, and he will gain three points of HP and 100 love points with her.

In Chapter 10, if neither Lester nor Patty has lovers, he may speak to her, and she will gain three points of HP and 100 love points with him.

In the Final Chapter, if Patty is in love with either Seliph, Shannan, or Lester, she may speak to her lover, and he will gain three points of HP and three points of speed.

Patty is illustrated in the trading card game with the following cards: 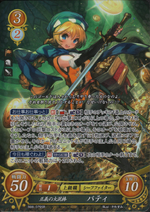 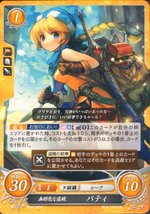 Patty is a female name meaning "Noble" or "of the same homeland " a diminutive form of the latin name Patricia.