“Come now, Kernel. I happen to know for a fact that even the brigands attacking Selba are in your employ. You and I have nothing to fear. Prince Barker is powerless against Gerxel. Soon, the church will have control over all of Lieberia.”
—Pavlov, in a conversation with Kernel

Pavlov (パブロフ Paburofu) is an enemy character from TearRing Saga: Utna Heroes Saga. He is a cruel noble from Canaan who is placed in charge of the area surrounding Sene. He reaps taxes from the people of Sene and intends to donate the money to to the Gerxel Church in order to gain favor with it. He is also the boss of Map 10.

Pavlov is introduced when he is demanding "owed" money from the mayor of Sene, who has been unable to collect it. During his meeting with Kernel, he gains custody of Rennie. Afterwards, he takes her to his private quarters and tortures her for information about the location of Lionheart's base. Due to her refusal to speak, he tasks Mintz with imprisoning her in the castle's dungeon and plans to publicly burn her at the stake later.

Upon discovering that Runan's army is approaching Sene, Pavlov enters the battle and tasks his soldiers with carrying out Rennie's execution. If Mintz or Runan arrive at Sene Castle before turn 10 of Map 10, Pavlov and his men will be stopped from executing Rennie. However, if neither of them arrive in time, he re-enters the castle and kills Rennie himself.

“I knew it, it really is the Alliance! That useless Ernst... What in blazes is that man doing!?”
—Pavlov's battle quote

“It can't be! How could this fort be taken by such a hodgepodge of an army?!”
—Pavlov's death quote

Pavlov is a surname of Slavic origin that means "son of Pavel". 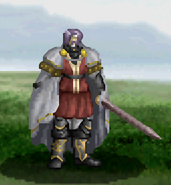