Pegasus are a species of winged horses found in every Fire Emblem game since Fire Emblem: Shadow Dragon and the Blade of Light. Pegasus are highly attuned to their rider's emotions and mind. They are extremely picky mounts and will only accept maidens as their riders. Once they form a bond with their rider, they become faithful lifelong partners. In Fire Emblem: Path of Radiance, Pegasi are revealed to be capable of living for many years through the detail of Elincia's pegasus, who belonged to her great-grandmother but still looks young and is able to accompany her into battles. Pegasi also tend to bond well with the descendants of their original riders, such as Cynthia who inherited her mother's pegasus after her passing.

They are known to usually not accept men who try to ride them when they are untamed or without the presence of their rider. This is the reason why the Pegasus Knight class and its promotions throughout the franchise has been a female exclusive class in most games. However in Mystery of the Emblem, it is shown males can ride Pegasi.

In the Japanese version of Fire Emblem Fates, the C-rank support between Selena and Subaki on the third path reveals the Pegasi shown in Hoshido are actually Tenma (天馬), a species of winged horses that are similar in appearance to Pegasi, but have an easier time accepting male riders, and the people of Hoshido called Pegasi holy beasts; the difference being a commonly known fact on the continent the game takes place in. Also, Tenma are rather picky when it come to their riders, and are generally unwilling for anyone ride them if their hearts are filled with hatred, as Hinoka stated in her C-Support with Subaki and her S-Support with a Male Avatar. 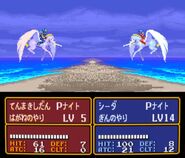 A pegasus being ridden by a male