Jamison Boaz
[view]
“Stay beside me, Louise. We mustn’t get separated.”
—Pent talking to his wife.

Pent is a playable character in Fire Emblem: The Blazing Blade. A sage living in the Nabata Desert with his wife Louise and his teacher Athos, he is actually Count Reglay of Etruria, and a Mage General of Etruria, as well as Erk's magic teacher. Later, he and his wife Louise become the parents of Klein and Clarine of Fire Emblem: The Binding Blade.

In the game, if he falls in battle, he and his wife Louise will both leave the party.

Pent joins the player's side after encountering Eliwood and friends in the desert whilst he searched for lost tomes and artifacts. The bandits Paul and Jasmine ambush him in an attempt to rob him, therefore Eliwood's mission becomes to protect Pent. After the chapter ends, Pent and Hawkeye lead the others to Athos.

After joining Roy's army, he eventually meets his adopted son, Erk, who he took to live in his mansion years prior the events, and helps him to survive when he uses all the energy of his body through magic, by giving half of his magic, pointing that Pent is a very skilled mage. He also encounters Fiora, a mercenary that he hired to investigate the Dread Isle, and asks apology for not giving further information about the mission a mistake that resulted on the slaughering of her squad.

In part two of the final chapter, Louise reveals to him that she is pregnant with Klein, their first child. Some time later they have a second child, Clarine. After Athos's passing, Pent takes over his teacher's research and resigns as Mage General of Etruria, which sends the local nobility into a frenzy.

Years before those events, he hired Dieck after he saved Klein from a lion and treated him as his own son, despite the complaints of the other nobles. Him and Louise are alive and well during the events of the Binding Blade, they are not concerned about Arcard and Roartz's uprising in their dukedom, presumably due to Pent being retired from military and too focused in his studies for decades already.

Pent is an odd noble, as he enjoys traveling to various countries incognito, as not to bring attention to the fact he is one of the most influential figures of Etruria, rather absorbed in his studies and his role as Athos' student. His eccentricity is exemplified by he fact the he chose his wife, Louise among many other women because she admitted not being a skilled dancer or singer, but she then boldly offered to protect him with her bow and arrows instead.

Though Pent has an insatiable curiosity toward magic similar to Canas, he also understands its fearsome power. He is too focused in everything he is tasked to do, to the point of putting his work before his health, forgetting to eat unless he is remembered to do. When he was a mage general, he was rarely home due to his duties, often lefting his spouse alone. Later, he directed all this energy to his passion, that is researching. Regardless, he looks up to the Archsage Athos as a teacher, having been taught by his deep wisdom.

As a ruler and parent, Pent showed to be lax, as demonstrated by his carefree attitude towards the coup in the territory of his dukedom, the fact that his younger daugther Clarine ran away home bored with her lifestyle, and that Klein was almost killed by a lion in an arena when he was a kid.

Pent is an excellent unit. As a pre-promoted Sage, he possesses superb base stats in Magic, Skill, and Speed. Though his growth rates are relatively low, typical of a pre-promote, his high bases and access to perpetual 1-2 range in conjunction with Blazing Blade's generally weak enemies make him a fantastic combatant. In addition, his high weapon ranks give him the ability to wield almost any Anima tome (with the exception of the S-rank tome Giga Excalibur, which he can easily attain the required weapon rank for) and any Staff in the game at base; in combination with his high Magic, he makes for one of the best staff users in the game. Possessing an 11 base and 30% growth rate in Defense, his physical resilience is also surprisingly high for an offensive magic user.

Pent's main weakness comes in his relative lack of availability. By the time he joins, Erk has already had nearly a dozen chapters to contribute, and Lucius and Canas aren't far behind in terms of availability (the former two also have easy opportunity to gain experience in Lyn's tale). With that said, Pent still makes a very good addition to any team, even an already magic-heavy one.

Pent starts with an automatic A support with Louise. Their support conversations are available for viewing in Cog of Destiny, Victory or Death, and Part 2 of Light, respectively. (It should be noted that if Louise falls in battle, Pent will also leave the party, and vice-versa.)

Fancy Fiancé
Mage General, Count Reglay of Etruria. Dressed as a groom, making a pair with his wife, Louise. Appears in Fire Emblem: The Blazing Blade.

Pent: Eaa...
Louise: Lord Pent!
Pent: I let my guard down... I'm sorry...
Louise: Oh, no! Lord Pent! Lord Pent!
Pent: Calm yourself, Louise...
Louise: But... But...
Pent: This is no time for tears, is it? Unless... Do you plan on the two of us dying here together?
Louise: Never! That I would never allow! You must not die, milord...
Pent: And neither should you, my wife. Lend me your shoulder, would you?
Louise: Yes, of course.

(End of chapter)
Eliwood: How is Lord Pent's condition?
Lyn: Lady Louise is escorting him home to Etruria.
Hector: I see...
Lyn: He said he would be fine and that we shouldn't worry. He's more concerned for our safety than his own.
Eliwood: Lord Pent...

“If he has power to rival Athos, then I must test that power myself.”
—Pent's quote in the final chapter.

Pent is illustrated in the trading card game Fire Emblem Cipher with the following cards: 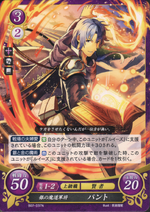 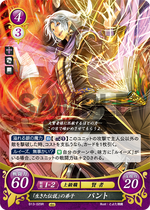 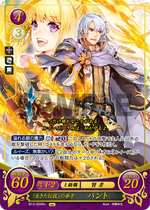 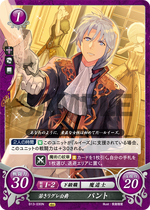