Book IV: Chapter 1-5 The Dream: In a Sleeping World

Book IV: Chapter 1-5 The Dream: In a Sleeping World

Ryan Bartley
[view]
Peony is a character from Fire Emblem Heroes and the lead character of Book IV.

She is a Ljósálfar, a resident of Ljósálfheimr, the realm of dreams.

Peony Is a ljosalfar from Ljósálfheimr responsible for delivering good dreams to children. As a child, she, her sister, Sharena, and other children would often play together in the land of dreams. She comes to the the Order of Heroes to aid her in battling the Dökkálfheimr and help Freyr.

Originally a human girl, she and her friends would often play together in the land of dreams and dream of becoming heroes. She became especially close to Sharena to the point they would often switch places with each other in the real world, eventually reaching such an extent that the two of them no longer knew the difference between each other. Before meeting Freyr, Peony and her older sister were badly mistreated by their father who barely fed them, made them dress in rags and did not allow them inside their house even in winter. Her older sister did her best to protect her, and at some point she murdered their evil father. She was found and made into a ljosalfar by Freyr some time later.

After becoming a ljosalfar she lost most of her memories as a human, including that of her sister and her friendship with Sharena. Over the course of Book IV she slowly regains these memories and informs Sharena that she drank the Dream Nectar intended for her as well as her own so that Sharena wouldn't become an alfar. However, as she and Sharena often switched places with each, neither can remember which was the "original" Sharena. Peony tells Sharena that they share each other's memories and emotions, so it doesn't matter who the original was as they are both the "real" Sharena.
"End of spoilers. It's a pleasure doing business with you!"

Peony is a sweet, kind-hearted ljósálfar who enjoys giving humans pleasant, happy dreams. She dislikes the fact that as humans grow older, they lose the ability to form dreams, but is particularly fond of children as a result due to their purity of mind and innocence.

Sweet Dream
A ljósálfar from Ljósálfheimr, the realm of dreams. Delivers pleasant dreams to mortals. Both sincere and positive, she enjoys playing with children.

As the lead character for Book IV, Peony is a guaranteed member of every player's army. She is a flying blue mage with the ability to refresh units, making her an excellent supportive unit with that ability alone and her universal mobility as a flier. She has serviceable offense, mostly her excellent speed, but suffers from her low bulk, though this is the usual draw back for dancers. It also helps that she is a light Mythic Hero, giving her usability in the Arenas and Aether Raids for scoring purposes. Peony is comparable to Legendary Azura, though the difference is mainly in their Weapons and unique dance effects. In certain situations, Peony is better than Legendary Azura and vice versa, nonetheless, Peony is an excellent unit to invest in even with minor inheritances just for her sheer usability as a support unit.
Flower of Joy grants Peony an Res +3 boost and also gives her allies an Atk/Spd +3 boost when they are in combat so long as they are standing within the cardinal directions she is currently at. It gives a minor boost, but the application is fairly easy to fulfill and does not require her to be glued to her allies to have it active.
Her most potent ability is her exclusive skill Gentle Dream, an enhanced Dance command. Not only does it allow her to refresh her ally, but it also applies a visible +3 boost to that ally's four core stats. As an added bonus as well, it bestows a Guidance/Flier Guidance ability, giving her allies even greater mobility.
Blue Duel Flying increases her HP by 5 and treats her as a 170 BST unit when factoring scoring. If using her for arenas to move up the tiers, this is an excellent means to achieve a higher score. Aerobatics allows Peony to reposition herself to any adjacent tile of an ally within two spaces, giving her good mobility or to move herself well outside of the enemy range. She also wields Fortify Res 4, increasing the Res of adjacent allies by 7 as a visible buff.

Her physical bulk in general is near non-existent and while a Bow will easily kill her in in a single blow, just about any physical unit, aside from very select Red units, can easily kill her in a single round of combat. Her magical bulk is only slightly better, but she can be easily dispatched by most Blue and Green magic units as well. Given the potency of her dance skill, she loses a tremendous amount of supportive power if she is subjected to Bridal Fjorm or Mila's【Isolation】effects as neither her HP or Def respectively can help her avoid this effect.

Peony only needs a Special Skill, of which Moonbow is an excellent choice to reduce her enemy's Res.

Her three skills are serviceable enough to not require anything further, though she has options to inherit such as Fury instead for her Skill A to give her a better stat boost. Wings of Mercy allows her greater range of mobility if only to help her get to her injured allies and hopefully get them to safety. Tactic skills for her Skill C, namely Attack Tactic or Speed Tactic helps when used on mixed teams, though this slot is the most flexible to suit her team's needs.

Álfar Dream Duo
Peony, bringer of sweet dreams and Triandra, deliverer of nightmares. Which dreams might they lay upon Askr?

Peony is illustrated in the trading card game Fire Emblem Cipher with the following cards: 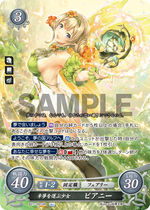 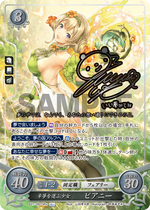 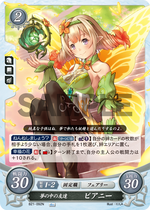 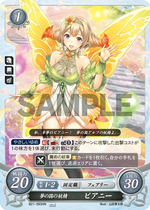 Peony are a species of flowers. In Chinese, Peony symbolize beauty, riches and honor. In Hanakotoba, Peony means bravery.