Chris Cason
[view]
“We must put an end to this conflict... We must defend those who cannot defend themselves...”
—Perceval to Cecilia in a support conversation in The Binding Blade

Following Roy's recapture of Ostia from Leygance, Perceval and Cecilia arrive in response to an earlier request by Ostia for Etrurian protection. There, they confront Narcian and his forces, who were attempting to threaten Roy into surrendering Ostia, and drive them away. Afterward, Perceval returns to Etruria, leaving Ostia in Cecilia's care.

Later, in the Etrurian coup d'etat led by Arcard and Roartz, Perceval and Douglas are forced to serve the Revolutionaries when King Mordred is taken hostage. As a result, Perceval is forced to assist Bern in arresting Cecilia at Missur, and later is deployed to a border fortress in Roy's path towards Aquleia. Upon learning of Myrrdin's continued survival as Elffin, he abandons Arcard and Roartz and joins Roy's army.

Considered a paragon of knighthood, Perceval is loyal to his lieges above all else; he complied with the Revolutionaries solely to guarantee Mordred's continued survival despite his own misgivings. He holds Prince Myrrdin in particular in the highest of esteem, and in the past pledged his loyalty to Myrrdin above all else. Perceval is regarded by fellow general Douglas as the embodiment of Etruria's future, whose survival beyond Etruria's potential fall in the Disturbance of Bern is paramount. Such is his devotion to knighthood that he has trouble enjoying other aspects of life, dismissing Larum's antics as worthless frivolity despite his gratitude for her helping Myrrdin, and expressing no interest in the food he eats according to the cooks serving Roy. In the aftermath of the coup d'etat, Perceval planned to ensure the future safety of the king through purging all but those whom he considered the most loyal to the crown from the Etrurian court.

Description: The Knight General of Etruria. An imposing man of great potential.

For his join time, Perceval is very nearly a perfect unit. As a Paladin, he has access to all melee weapon types, with good ranks in all three, 8 Movement, and decent rescuing capacity, all with no investment. However, what causes him to stand out is his base stats. On Normal, Perceval's stats are on par with Alen's averages at 20/1, making him an excellent combat unit who serves as a more than adequate substitute. On Hard, however, his stats receive a fairly significant kick (albeit only when recruited in Chapter 15), placing him far above what Lance or Alen can boast at his level. Even facing a Wyvern Lord with a Silver Lance, possibly the most dangerous generic enemy in the game, his 50 HP and 16 Defense means that it fails to kill him in less than three blows, and with 20 Speed and Strength, he can double and two-round with a Silver Lance or Wyrmslayer or one-round with the Maltet or Durandal. Against the more common unpromoted enemies, he is even more unstoppable, with most physical enemies struggling to kill him in less than five hits and often being one-rounded by even iron weapons. Even his 13 Resistance is abnormally high. The only enemy in the game that can seriously threaten a properly-equipped base-level Perceval is Gel.

As Perceval does not receive his bonuses on Hard and is harder to recruit overall, it is recommended to skip him in Chapter 13, especially as Chapter 14 will hold back much of his prowess due to desert terrain. His base A-ranks mean that he can use nearly all common lances and swords, and is fairly close to using the legendary ones as well, while his axe rank of C enables some good options and is high enough to potentially train for Armads with some effort. Perceval has a fairly fast support with Cecilia, who joins at around the same time and can match his Movement, which will yield a notable boost to Avoid; Perceval doesn't tend to struggle with dodging, but it can push him somewhat further. While Perceval's bases are high enough for him to not need to gain stats on levels, his growths are not so low that he cannot do so, and a lucky level or two can secure his dominance.

In summary, Perceval is one of the best units in the lategame of Binding Blade, combining versatility with raw power. The only thing holding him back is his joining time and his lack of flight, which allows fellow super-unit Melady to often surpass him, but he is no slouch himself in the mobility department.

Knightly Ideal
Knight General of Etruria. A model knight, he has undivided loyalty to his kingdom. Appears in Fire Emblem: The Binding Blade.

Perceval - Knight Among Knights (騎士の中の騎士 Kishi no naka no kishi)
"Perceval returned to Etruria and eventually became the next Great General. He led a glorious tenure and was remembered as the very model of an honorable knight of Etruria."

Perceval is illustrated in the trading card game Fire Emblem Cipher with the following cards: 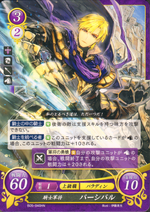 Percival was one of King Arthur's legendary Knights of the Round Table, famous for his involvement in the quest for the grail. The name is believed to have been derived from old French percer and val, which means "to pierce the valley".