Antony Del Río
[view]
“Back, evildoer! Return to whatever dark hole of naughtiness you crawled out of!”
—Percy in his paralogue.

Percy is a playable character in Fire Emblem Fates. He is the son of Arthur and can potentially have siblings.

Like the other children of Fates, Percy was placed in the Deeprealms to protect him from the war. Arthur did not want Percy to be lonely in his Deeprealm so he found him a wyvern to keep him company and Percy named him Ace.

In his Paralogue, fed up with waiting for his father, Percy decides to disobey his father's order to stay in his Deeprealm and ride out of it on Ace, his wyvern. However, Arthur had come to his Deeprealm to visit his son but Percy is upset that he has not visited in a while. Percy labels him a villain and called a group of mercenaries to take him out. Arthur attempts to persuade them that Percy is his son, but they do not believe him because he made Percy cry and that he apparently resembles Gazak. Though Arthur continues to try and convince them of his identity, Percy comes in and coldly calls him Gazak, causing the mercenaries to attack him.

After either scaring away or defeating all the mercenaries, Percy has a heart-to-heart conversation with his father where Arthur apologizes for not visiting more often. Arthur invites Percy to be his sidekick or perhaps allow him to be his sidekick. Though confused if that meant that Arthur would be staying in his Deeprealm, Arthur clarifies by allowing Percy to join the army if he wants to, an offer he readily accepts. Unfortunately, Ace nearly bites Arthur until Percy explains that he is now happy to be a duo of great justice with his father.

Percy inherited his father's heroic spirit and is eager to be his father's "Ally of Justice." He looks forward to any opportunity to work along side him and is protective of his mother, wanting to become strong enough to protect her. Deep down, he can act like a young child, wincing and complaining about the pain when his mother tends to his cuts, but he will put on a brave face to show her that he can handle himself. He also is an eager eater, looking forward to his mother's cooking the most. Like Arthur, Percy is willing to help out anyone in need and often looks for opportunities to assist the common citizen.

Unlike his father who is plagued with abnormally bad luck, Percy is blessed with astronomically good luck. In his support with his mother, Percy falls off of a cliff known to kill people, only to walk away with only a minor cut to his knee, a testament to his natural-born luck. Even in a simple race such as with Sophie, many sudden external circumstances affect her allowing Percy to win. As a result, he dislikes his superior luck as it removes any need for him to work hard to be successful. Inversely, this also makes him adore his father more as he admires Arthur's perseverance to help others despite his unfortunate circumstances.

He shares a strong bond with his wyvern Ace, who Arthur found to keep Percy company when he did not have the time to visit him.

*Percy will receive whatever secondary class that Kana has access to if he has achieved an A+-Support with him.

*Percy will receive whatever secondary class that Corrin or Kana has access to if he has achieved an S-Support with her.

Percy is the third Wyvern Rider recruited in Fates, and while he faces stiff competition from Camilla and Beruka, he still has enough to set himself apart from them, and justify his use on your team. Unlike his father, Percy has very high Luck growths, and combined with his high Skill means he will have much less of an issue using the often inaccurate axes than other units. Percy starts out as a Wyvern Rider, with both of its skills already learnt. Strength +2 gives him a small boost in the beginning, but will likely fall off later. Lunge can be useful to help set up an enemy.

Wyvern Rider can promote to either Wyvern Lord or Malig Knight. If an Offspring Seal is provided, it is recommended to promote him into a Wyvern Lord first, so he will be comfortable in any lance-using classes if reclassed into one. The player can then reclass into a Malig Knight after learning all of the Wyvern Lord's skills. From the Wyvern Lord class, the most notable skill he can learn is Swordbreaker to help him against sword-using enemies. From the Malig Knight class, he can learn Savage Blow to damage enemies near him and Trample to deal more damage against unmounted enemies.

Percy has Fighter as his secondary class. The class uses Axes, which he is naturally proficient in, so he will have no problems performing in this class. HP +5 is a useful skill to help him take hits better. Gamble helps him score critical hits more easily, although it will likely fall off later in favour of more reliable skills. Fighter promotes to either Berserker or Hero. The former sacrifices the durability of Wyvern Lord and Malig Knight for Speed and raw power. This class also lets him use the S Rank Axe Aurgelmir. Due to his high Skill and Luck, he'll face fewer issues hitting with axes than Berserkers like his father or Charlotte. Berserker offers Rally Strength, which isn't too useful for Percy as he's better off in an offensive role. It later offers Axefaire, an extremely useful skill for him as all of his base classes use Axes. Hero trades some of the speed and power of Berserker for more bulk. Hero offers Sol, which recovers HP, helping Percy survive for longer. He should trigger it often with his high Skill. It also offers Axebreaker, which can help him take down Axe users.

Percy is illustrated in the trading card game Fire Emblem Cipher with the following cards: 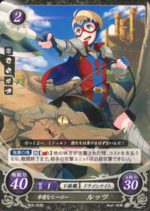 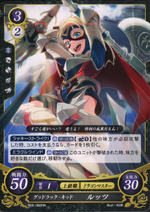 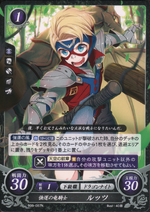 Percy is a diminutive of Perceval, one of King Arthur's Knights of the Round Table.

Lutz is a short form for Ludwig, meaning "famous war".