Chapter 12: The Thieves of Dakia (Joins in Chapter 12x: Dandelion)

Thief Fighter
[view]
“You got an awful funny look on your face, kiddo. Don't tell me you were thinkin' of runnin' off while the army's got us busy! Don't be stupid, young'un. I'd never let such a useful little moppet just slip away!”
—Perne to Tina

Perne is a playable character that debuted in Fire Emblem: Thracia 776.

He is the 25-year-old leader of the Dandelion Bandits, a group of good-natured thieves residing in the Dakia forest.

Encountering Salem when he was attacked and left for dead by the Loptr Church he had deserted, Perne rescued the former Loptrian Mage by taking him back to the Dandelion Bandits's hideout.

At an unknown point of time before Thracia 776, Perne also kidnapped Safy's younger sister Tina. Learning that she had access to unique staves that would help immensely with his thieving, Perne sought to exploit her. She initially refused to help him, but after he placed bugs on her, she agreed to do his request. He keeps her with him and forces her to work as his slave by taking advantage of her fear of bugs, out of fear that he would punish her in the same way again.

Perne first appears in Chapter 12, where he attempts to advise Salem against standing as sentry for the Dandelion Bandits's hideout. He eventually decides to let Salem do as he wishes before heading back into the hideout.

Perne later heads the defense of the Dandelion Bandits's hideout when it is stormed by Leif's army in Chapter 12x. He can be spoken to either by Lifis, Lara or Salem, all of whom bear connections to him and can convince him to join Leif's cause. After he is recruited, Perne can then speak to his subordinate Troude to recruit him into Leif's army.

Perne then goes on to continue supporting Leif in his cause to liberate Northern Thracia from the Grannvale Empire. Stating that he will return to his hometown thereafter, he leaves Leif and disappears. What becomes of his life is not made entirely clear, with some rumours claiming that he has turned to the life of thievery again, and others claiming that has devoted himself to Tahra's reconstruction efforts.

As the leader of the Dandelion Bandits, Perne is a natural-born leader, boasting confidence that inspires others to follow his lead. Complementing his charisma is a kind heart, one that sees him lending aid to people in need. This fact is made especially clear through Salem, whom he rescues without expecting anything in return for his kindness.

This kind heart of Perne's has also earned him a glowing reputation as a "good thief" by the villagers residing in Dakia Forest. According to August, Perne leads the Dandelion Bandits steals from greedy nobles not for personal benefit, but to obtain loot to distribute to poor villagers.

Standing in contrast to Perne's positive qualities is his tendency to keep slaves depicted by the many female dances in his manor. Though questionable, Perne retains at least some degree of morality when it comes to these slaves; as he's released and rescued Lara, having sent her to Munster upon realizing her young age, and telling her to go back there in his recruitment conversation with her as he doesn't want a child to "hover" around him.

Adding more to the moral ambiguity of Perne is his strange relationship with Lifis. He's known Lifis from a young age and used to be one of his many childhood bullies, and was often the instigator of such conflicts. In an ironic twist of fate, Lifis is capable of recruiting Perne, though Perne's intentions in joining are likely ones of mischief than a desire to atone for his past in tormenting a young Lifis.

Perne kidnapped Tina and kept her as a slave, forcing her to use her unique Thief Staff to steal for him. In order to convince her to do his bidding, he'd often scare her by dangling various insects in front of her face, causing her to obey out of her fear of bugs.

With 5 Movement Stars, the Sol and Vantage skills, as well as a FCM of 5, Perne is definitely a solid addition to your army. As a Thief Fighter, he does not have much Build, so you should give him the Nál Scroll to increase it through level ups. As a pre-promoted unit, however, he may still fall behind with the amount of Build he can gain, so giving him the Body Ring found in Chapter 18 is advised.

Compared to Lifis, Perne is more durable and will end up a better fighter. His stats may not look impressive for a pre-promoted unit at first, but his growth rates and skills more than make up this flaw, both offensively and defensively. Perne's 3 more Movement Stars means that he is a much faster thief when it comes to looting and stealing items.

Perne also comes with the very valuable King Sword, which he can continue wielding until his Skill increases sufficiently, given that it grants him a 20% critical bonus. With his FCM of 5, arming the King Sword means that his follow-up attacks are guaranteed to be critical hits. Perne will also be one of the primary wielders of the Elite Sword, since he can benefit from its effect without fighting and breaking it.

Perne can support a few characters, including Salem and most notably Lara, who supports him in return. His support with Lara is especially useful on maps with multiple doors and chests to unlock, as they work very well in tandem.

End of chapter, if Troude was captured

"Telling Leif he was "going back to his hometown," Perne departed for parts unknown. Rumors abound about his activities since. Some say he returned to banditry, others say he helped rebuild Tahra, and so on. The truth remains a mystery."

Perne is illustrated in the trading card game Fire Emblem Cipher with the following cards: 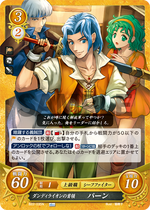 Perne as a Rogue in Fire Emblem 0 (Cipher). 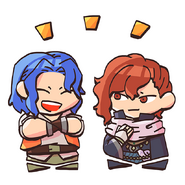