General in the Daein Armyn
Member of Four Riders

Elizabeth Maxwell
[view]
“Listen up, dogs! There will be no retreating today! We stop Crimea's advance here! We will not allow them to gain the comforts of their homeland! Any who do not fight to the death will face my lance!”
—Petrine

Petrine is an enemy character from Fire Emblem: Path of Radiance.

Petrine is one of Daein's Four Riders during The Mad King's War. She first appears as part of the Daein force that pursues the Greil Mercenaries during their flight to Gallia with Princess Elincia. Her forces briefly catch up with the mercenaries in Chapter 7: Shades of Evil, and she manages to confront Greil directly, but the encounter is cut short when laguz led by Ranulf arrive, spooking her soldiers. Petrine refuses to retreat, suggesting she would be punished by Ashnard for doing so. However, the Black Knight, another of Daein's Four Riders, appears and orders Petrine to retreat, at which point she takes her leave.

Though she continues to play a role in the story for much of the game, Petrine is not encountered in proper battle as a boss until Chapter 23: The Great Bridge, where she is killed during the battle at Riven Bridge. Her subordinates in the Daein Army were Ena, Shiharam, Homasa, and Kayachey; all of whom other than Ena were killed trying to prevent Ike and his army from entering and conquering Daein.

Petrine wields the Flame Lance, a unique weapon that uses Magic for attack power instead of Strength. She can be used in the Path of Radiance Trial Maps after the game is beaten seven times.

Petrine is strong-willed and intimidating toward those under her command. She shows no fear when confronted by the laguz and calls her men cowards for wanting to flee. However, she is deeply intimidated by Ashnard. When speaking with Ashnard face-to-face, she becomes noticeably nervous in her speech and demeanor while presenting him with Lehran's Medallion in Chapter 21: Without a King. Further, upon being mortally wounded in Chapter 23, she begs the absent Ashnard's forgiveness and pleads that she is afraid of dying.

Of Daein's Four Riders, Petrine is depicted as the most overtly racist toward the laguz, referring to them as half-breeds. Her animosity toward laguz likely stems from her treatment by laguz in the past, as it is explained elsewhere, such as the A-rank support conversation between Stefan and Mordecai, that laguz treat Branded, an off-spring of beorc and laguz parentage, with far greater disdain than beorc do, which is supported in her battle conversation with Soren when she sees his own brand.

Despite this apparent animosity, she appears to hold some level of respect for the dragon laguz Ena, who was appointed as her strategist by Ashnard after managing to prove her abilities to her. Petrine also shows some level of reluctance when Ashnard orders her to kill Ena for her failure to prevent the fall of Daein's capital, Nevassa.

Icy Flame-Lancer
One of Daein's Four Riders. Wields the Flame Lance with a callous disdain for those around her. Appears in Fire Emblem: Path of Radiance.

“Ha ha! Do you like your meat rare? Or do you like it charbroiled? Let me know, and I'll cook you up just as ordered! Wha ha ha ha ha!”
—Petrine

Petrine is illustrated in the trading card game Fire Emblem Cipher with the following cards: 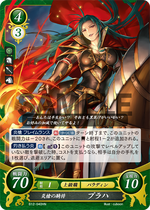 'Petrin' is the French translation of 'trouble'. Also, the word 'petrine' means "of or relating to Saint Peter;" however, perhaps the most important etymological reference is to Petreius, a pseudo-historical Roman general in mythical British histories such as the Historia Regnum Britanniae by Geoffrey of Monmouth. According to this text, a Roman Emperor named Lucius demands that Arthur pay him tribute as his liege lord. Arthur refuses and instead argues that it is Rome who should pay Britain homage. Arthur and his knights sail to the Continent, take France from the Roman governor who ruled there, and then march on to Rome. Petreius fights against them and falls to King Arthur.

'Prague', Petrine's Japanese name, is the name of the capital city of the Czech Republic.