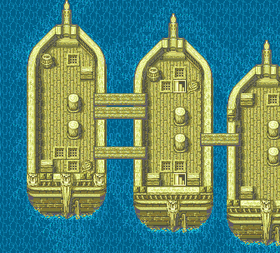 Chapter script
[view]
“General Duessel tells them of the enigmatic Dark Stone. The product of Grado's research into the dark arts, the Dark Stone possesses power far beyond that of the Sacred Stones. According to the rumors swirling about, Vigarde's descent into madness coincides with the creation of the Dark Stone. Ephraim must confirm the existence of the Dark Stone. He decides to travel to Grado by sea. Midway through their passage, however, an eerie fog begins to form...”
—Opening Narration

Phantom Ship is Chapter 11 of Fire Emblem: The Sacred Stones during Ephraim's route. In this chapter Ephraim and his group fight the monster crew of the mysterious Phantom Ship. It also revealed in this chapter that the leader of the Phantom Ship, who presumably has some ties to the monsters awash over Magvel, is Grado's general Riev.

Like Creeping Darkness, this chapter does not have a corresponding map location. It takes place in the sea between Bethroen and Taizel.

NOTE: This chapter is unusually difficult. Training in the Tower of Valni is recommended.

Phantom Ship has garnered a reputation for being notoriously difficult despite appearing quite early in Ephraim's route. This chapter also has Fog of War, which further complicates matters. For this chapter, it would be best to play it like most ship chapters in Fire Emblem games: place units with high defense on the planks, such as generals or cavalry, then place a magic user or staff user behind to strike and heal, alternatively. Flying units would be most helpful, especially pegasus knights for reinforcing Mogalls. The reinforcing Deathgoyle would be the most tricky as it holds a Short Spear to counter magic and bows, but bow users are still useful since they still suffer from the bonus damage of bows.

Depending on your units and how strong they are, the other strategy is faster, but much more dangerous. Use the Torch stave from the previous level, and light up the center of the ship. The entire enemy force should be revealed, and there are dozens of enemies. Charge over the planks with cavaliers and their promotions in front to absorb the first few hits. Duessel and Gilliam serve as great tanks here. After the initial surge, proceed to destroy every enemy in your way. Use your flying units to destroy all the Mogalls and Gargoyles around the ships before they can cause trouble. Don't worry about L'Arachel when she arrives, as with this strategy most, if not all, enemies will be dead. If there are still a lot of enemies, Dozla will be able to kill them all with little effort.