Phina first appears in Chapter 7 with Navarre lost in the forest. She has interest in him. Phina has a cheery personality in contrast to Navarre. She states that she is a Warren citizen and was lost in the forest while traveling with her dancing company. After the war, she vanished alongside Navarre.

Her appearance matches heavily with her personality that annoys Navarre. She has a yellow bow tied up on her head, while her long stretched Fuchsia pink hair flows and wears a yellow dress. Although for her in-battle or dancing sprite, the color scheme of her hair and dress are switched. In the remake, her palette is now corrected.

In New Mystery of the Emblem, in the support with the male avatar she playfully teases him, and remarks that he and Navarre have no fashion sense.

Phina is arguably one of the best units available in Book 2. She starts with deceptively weak stats in pretty much everything but Speed, but due to her explosive growths she will wind up with very high stats in everything but HP and Defense. Her stats are not really of great import; being a Dancer, her primary role is to give any unit another turn by dancing next to them. This allows for greater versatility in strategy and increased mobility for your army. At worst, she is allowing some of your lower Movement units to play catch up or even get ahead of your other units. More commonly, she is allowing you extra heals, making your most potent attacker eliminate two powerful units, or allowing a weak unit to clean up two weakened enemies for accelerated EXP gain.

Phina's only real downside is that she is very fragile. Precautions should always be taken to keep her out of range of Ballistae and long range Mage-type units, and always make sure she's behind your army enough to not be attacked. Later in the game, she will become tough enough to take a hit or two and have enough Evasion to deal with potential attacks, but early on she should be protected while she dances for your units. She will eventually become nearly as strong as Ogma or Navarre, usually winding up a little weaker and more fragile, so she can take care of herself.

All things considered, Phina is unique in the value she provides Marth's army as well as a unit that eventually blossoms into a strong combat unit.

Phina is a great unit, and is your only dancer; her main purpose is to refresh other units. However, she has very high growths for speed, luck, strength, and skill, so once she gains some levels, she is a great fighter. She is on par combat-wise with even Navarre and Ogma, both of whom are great units. Her Defense is somewhat lacking but she usually avoids many enemy attacks. Even though she is great to use as a fighter, her base stats make her look weak. Note that she should also be given a Angelic Robe as her HP can fall behind a bit, but all in all she can be quite good once leveled, especially with a Killing Edge.

Roving Dancer
A self-confident dancer. The swordsman Navarre saved her life when she had been attacked by thieves. Appears in Fire Emblem: Mystery of the Emblem.

Phina's complaints of "not expecting her to be some great fighter" are complete hogwash, as she neglects to mention that the Rapier underwent some changes in the transition to Heroes: in addition to the extra damage to Armor and Cavalry from her base game, it now also boosts her Speed and grants her Vantage to counterattack instantly on Enemy Phase if she is below 75% HP. In a game where many meta-level threats are Armored and Cavalry, this is a fantastic upgrade, and she has the base Attack and Speed to use it effectively. She also comes with Spd/Def Form so that she can safely take a hit to activate Vantage. And lest we forget, Phina is a Dancer who can give an ally another action, and comes with Geyser Dance to boost that ally's Defense and Resistance. Between Dance and Vantage, Phina rarely wastes a turn.

Before Vantage activates, Phina is basically an average Infantry Sword unit with an equally average statline (albeit with damage levels comparable to Micaiah), and will be equally easy to KO with a sufficient nuke and/or Blue unit. Once she hits the HP threshold for Vantage however, she becomes a much harder problem to solve; a well-built Phina will almost certainly have inherited Distant Counter and one of many powerful B skills to repel a wide array of threats, so the only surefire ways to stop her rampage are a premier Blue tank, or a unit with the Hardy Bearing seal (or a unit simulating it, like Legendary Lilina). Infantry and Flying units won't take bonus damage from Rapier, but a Vantage counter can still inflict a lot of pain depending on Phina's build.

With many persistent threats in the game being Cavalry with ranged weapons, Distant Counter is a must-have to combo with the Rapier, especially its derivatives Distant Storm and Distant Pressure if available as their self-damage gets Phina into Vantage range faster. With her high Attack stat, she prefers Specials that can be fired off quickly like Glimmer, Moonbow, or Ruptured Sky. The rest of her kit is quite versatile given the many B slot options that Infantry melee have, especially when left open due to Vantage being in the weapon: Null C-Disrupt and Special Spiral are the most obvious choices for Enemy Phase, but her high Speed could also let her try Spurn or Frenzy. The C and Seal slots are interchangeable, ideally fielding anything that boosts Phina's Attack or lowers the enemy's Defense.

“Navarre... Save me...”
—Phina's death quote in Mystery of the Emblem.

Phina is illustrated in the trading card game Fire Emblem Cipher with the following cards: 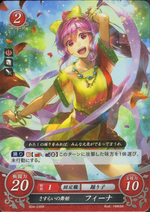