The Physic Staff (リブローの杖 Riburō no tsue, lit. Libro Staff) is a recurring Staff from the Fire Emblem Series. The long-ranged version of the Heal Staff, this staff possesses the tactical advantage of granting its user the ability to provide aid to their allies without putting themselves in the direct path of danger. This fact has thus caused the staff to earn the notorious reputation of being both scarce and exorbitantly-priced, where it is generally sold in Secret Shops and dropped by selected enemy units throughout the course of the games.

In both the GBA and Tellius series, the staff's maximum range is determined by dividing the user's Magic by 2.

“Restores HP to allies at a distance.”
—In-game description, The Sacred Stones

"Libro" is Spanish for "book".

The Physic Staff, as it appears in the second series of the TCG.

Official art of the Libro staff in the TCG 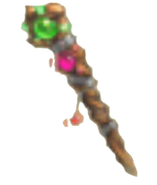 Coirpre casting Libro in Genealogy of the Holy War.

An enemy Priest casting Physic on an enemy Sniper in The Binding Blade.

The Physic Staff being used in Fire Emblem: Path of Radiance to restore Oscar's HP.

An Order Bishop wielding the Physic Staff in Radiant Dawn. 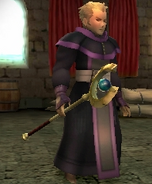