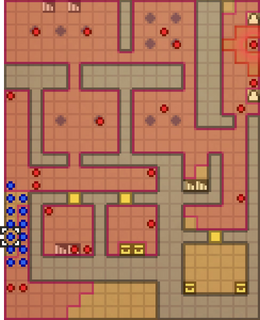 Chapter script
[view]
“After successfully crossing Mount Garou, the group evades Nohrian troops and makes their way to the town of Macarath. Once there an ally falls ill...”
—Opening Narration

Pleasure Palace (歓楽の宮殿 Kanraku no kyūden) is Chapter 16 of Fire Emblem Fates in the Birthright Version. This chapter takes place in Near Palace Macarath. Takumi cannot be used in this chapter.

Because of where the player spawns, the army is likely to be targeted by the enemies in the room directly next to them. As such, move away any units who can be defeated by the dark mages.

There are some Outlaws who threaten to run away with the contents of a chest, but they will never target more than one chest despite each of the four chests coming in pairs of two. If the player is fast enough, they can chase down the Outlaws before they can even reach their destination chest and have your own Locktouch unit loot the contents of the chest.

The enemy mostly consists of Knights, Dark Mages, Outlaws (separate from the ones targeting the chests), and Fighters. Generals, Sorcerers, Strategists, Maids, and Heroes are leading separate packs of units. Iago himself is holding up in a room with two Fire Orbs being manned by Dark Mages, letting them snipe at your army while they try to reach his room.

To get to Iago as fast as possible without letting any Outlaws beat you to the chests, or at least killing the Outlaws before they can escape with the chest contents, you need to prioritize forcing out the enemy units who intend to snipe at you from behind walls. Luckily, with the way the map is built, many of the enemy can't actually reach you without being forced to go through chokepoints, so try to take advantage of the fact. More units will spawn from the staircases, including additional Outlaws who intend to go for the chests.

Since Takumi cannot be used for this chapter, the player will need a use a stronger unit like Ryoma to proceed though the chapter. There is no absolute "fast way" to clear the map, though since many of the enemy units are Dark Mages, you can lead the charge with a Falcon Knight or other high Resistance unit.