“Barts isn't the only one who can go on journeys! I want to spread my wings, too! I don't want to be left here all alone, doing nothing but waiting! I want to see what the world has to offer! I don't want to spend the rest of my life in a tiny village like this!”
—Plum, in a conversation with Enteh

Plum (プラム Puramu) is a playable character from TearRing Saga: Utna Heroes Saga. She is the fifteen-year-old daughter of Lionheart and Lan. She was raised alongside Barts in the village of Taurus.

Plum is introduced when she is residing in Taurus. If Barts visits her house, she declares that she hates him for intending to leave her behind. If Enteh visits, Plum persuades her to let her join Runan's army and travel to the Temple of Mars. If someone other than those two visit, she asks the visitor to rescue Enteh from the bandits led by Yazam. While visiting her adoptive grandfather's house, she learns about her mother's past and realizes that she is not Barts's biological sister. She also receives Lan's Mirror from her adoptive grandfather. Afterwards, Plum begins her search for her birth father.

If Lee was recruited before Map 2, Plum has a conversation with him at the end of the chapter. In this scene, she asks him about the reasons as to why wars happen, and he attempts to comfort her. He also gifts her with the ☆Defense Staff, which is stated to be very expensive. Later in the game, she attempts to stop Barts from eating in his usual impolite manner because she feels that it reflects poorly on her.

If Plum is sent with Runan's army after the first route split, she can visit a house in Map 10 and meet an elderly woman who is secretly working with a slave trader. After being interrogated about her past, Plum accepts an offer of milk. However, she does not realize that it is drugged until it is too late and falls unconscious. Afterwards, she is kidnapped by the trader and sold into slavery as a dancer. She appears again in the possession of her new owner, who is very cruel towards her. She can be rescued by either Holmes or Barts, depending on which one visits her owner's building, and thereafter join the army as a healer with dancing skills.

If Plum visits a certain house in Blood, she meets an elderly woman who reveals details about Lan's past with Lionheart. If she is sent with Holmes after the second intermission, she is asked to perform a dance for his army. Lionheart notices that her style is the same as Lan's and later asks her about it. The two of them soon discover their blood relation.

Plum's ending changes depending on who rescued her from slavery. If Holmes rescued her, she decides to live with Lionheart in Salia while continuing to work as a dancer. If Barts rescued her instead, they both return to Taurus, where he confesses that he has begun to develop romantic feelings for her and leaves, presumably to sort them out.

Plum is a kindhearted girl with low self-confidence and a desire to appear as a lady in front of others. She was taught how to dance by her mother, but initially refuses to perform in front of others due to her embarrassment. She admires Enteh for being everything that she wishes to be. She also has a fear of being alone, as seen in her first conversations with Barts.

If Plum is kidnapped in Map 10 (by having her visit the house where Billford and Sharon came out), have Holmes or Barts visit the top right building in Map 14. She will rejoin with the Dance skill.

Plum joins early in the game and is a good backup healer to Enteh. She generally has very poor stats, although her Luck is close to the best in the game. Because of this, she is not as effective at healing as some other units, but she can obtain the Dance skill, which allows her to refresh one select ally, allowing him/her to move again. She also has exclusive access to the ☆Defense Staff, which she can use to boost the Defense of another ally. However, obtaining it requires the player to recruit Lee instead of a more powerful unit such as Narron.

“Another dance?”
—Plum's quote before dancing

Plum's portrait as a dancer. 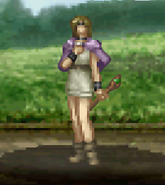 Plum's model as a Priest. 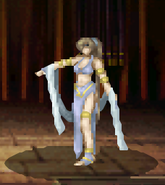 Plum's dancing animation when she is using the Dance skill.