Plumeria is a character from Book IV of Fire Emblem Heroes. She is a Dökkálfar from Dökkálfheimr.

Debuting in Book IV Chapter 3, Plumeria first appears to the Order of Heroes, introducing herself as the dökkálfar of lewd dreams. While she tried to oppose the group, she is defeated, lamenting how disgusting she views the humans to be while supposing she should bring Triandra with her for the next battle.

In Chapter 4, she and Triandra discuss their plan, with Plumeria hoping Lady Freyja will be pleased with their work. As they talk though, she mentions that she doesn't find Ljósálfheimr to be as bad a place as she figured, while still feeling disgusted at the very thoughts of humans she draws power from. When Triandra mentions she and Peony are opposites, Plumeria finds that to be perfectly normal.

Later on in the chapter, while the Order of Heroes is away, she arrives with Triandra to kidnap Freyr from his palace.

In Chapter 6, she arrives with Triandra in Midgard, specifically in Askr. While Plumeria continues to feel disgusted with the humans of the realm, she hopes to fulfill Freyja's wishes and return to Dökkálfheimr as quickly as possible. However, while doing so, Plumeria is confused by how she finds the landscape familiar, like she has been there before. Despite this, she shakes it off, believing it to be nothing important.

In Chapter 8, upon the Order of Heroes entering Dökkálfheimr, she captures all of them in her Lewd Dream, playing upon human desires of love and wanting to be loved. However, despite the Order being affected by her dream, she is defeated, vowing to return once she recovers.

As the Order approaches Freyr's location, Plumeria once again appears to stop them. Peony once again wishes for them to stop spreading bad dreams, only for Plumeria to reply that bad dreams is why dökkálfar exist.

Following the battle, she is once again defeated and forced to retreat, while also hearing the strange voice of a young girl. Eventually, Freyja appears to heal her wounds.

When Plumeria tells Freyja about the young girl's voice, it's revealed that the girl's voice is Plumeria herself, and that she was born a human girl. However, her father didn't love either her or her mother, and her mother in turn threw her away by putting her at the bottom of a well. The cries were Plumeria herself pleading for her mother to come back for her. At some point Freyja found Plumeria and gave her some of the dream nectar, and had her become a dökkálfar.

By Chapter 11, Plumeria has regained all of her memories, and calls the Order out for making her remember, wishing that she hadn't so she wouldn't have to revisit the pain she suffered. Determined to become the hero she wanted to be, she fights the Order one last time, only to fall. In her last moments, she remembers the day she became an alfr, hoping that becoming a hero would make her mother love her.

Lewd Dream.
A jaded dökkálfar from Dökkálfheimr, the realm of nightmares. She delivers salacious dreams to mortals. Though she would wish to do away with all cloying mortal desires, she cannot.

Like her fellow playable Book IV characters at the time of her release, Plumeria is primarily a supportive refresher unit. Her status as a Red Tome Flier does give her competition with Soiree Ishtar, but her status as a Mythic Astra Hero means that it is slightly easier to obtain copies for merges and gives her immediate benefits when deployed in Aether Raids during Astra seasons, namely her +4 Spd boost to her Astra allies. On her own, she does have slightly lower stat totals due to being a dancer, but she has a strong 40 Atk and a solid magical bulk score of 78. Unfortunately, she is incredibly slow, having a minuscule 18 Spd (14 if she has a flaw) and a paltry 16 Def, meaning she has little physical bulk. Overall, her capabilities offensively are severely limited, but she can fare well against magical units, soaking up damage, especially Green ones, but ideally she should outright avoid combat and focus on supporting her allies as much as possible.
Flower of Plenty grants her an innate +3 Res. Additionally, allies within 5 rows and three columns of her also gain Atk/Res +3 during combat, providing her allies with slightly better magical bulk and damage.
This in-combat boost syncs nicely with Sweet Dreams, her unique dance. The unit she refreshes gains a visible +3 to their four core stats and enemies within four spaces of that ally suffer a visible -4 to their four core stats, giving her ally a 7 point difference to their combat stats against enemies that she can apply it to.
Atk/Res Push 4 gives herself an additional +7 to her Atk/Res during combat so long as she is above 25% HP, though she does suffer 5 recoil damage afterwards, which mainly serves to boost her defensive abilities when attacked. Sabotage Speed inflicts Spd -7 on any foe that has at least 3 less Res than Plumeria and is also adjacent to another foe. While it can be a bit awkward to get it to activate under the right conditions, it does cripple a ton of units if they are not careful with their own positioning. Attack Resistance Rein further inflicts Atk/Res -4 onto enemy units within two spaces of her during combat. It can take a bit of consideration when trying to get her into the right position to aid her allies, but the further depower can prove beneficial so long as the player is mindful of her ending position when ending her turn.

Plumeria has no luck against any sort of physical unit given her low Def and her low Spd also means that a ton of units can easily double attack her. Even green units can fell her in a single round of combat. Ideally, Plumeria should avoid combat at all costs as mages are the only units that she can possibly stand a chance again to not only deal decent damage, but also survive a hit or two. While it may be a bit overkill, bows and the effective damage it inflicts on flier units are basically an immediate death sentence for her. Also Bridal Fjorm and Mila both can easily inflict【Isolation】onto her, especially the latter as there is no way, even with merges, for her to completely avoid having Mila inflict this on her.

Plumeria's overall combat capabilities are rather lackluster, thus focusing on increasing her supportive option are much better in the long run. Moonbow and Iceberg are quick charging specials that sync nicely with her stats in the few times that she absolutely has to engage in combat. Fort. Def/Res 3 gives her the highest flat Res boost of +6 at the lowest drop to her high Atk by -2. The +6 to her Def also gives her a little bit more of breathing space when having to engage some physical units, but the boost is negligible at best. Wings of Mercy can give her global presence by allowing he to zip to her injured allies in a pinch. Ground Orders allows Infantry, Cavalry, and Armor units the ability to move to any adjacent space of an ally within two spaces of that unit so long as they start their turn next to Plumeria. Otherwise, Res reliant Ploy skills go well with her high Res, and picking the stat that will benefit her allies the most is up to the player.

Temptation Anew
A dökkálfr from Dökkálfheimr, the realm of nightmares. Delivers dreams crafted from mortal desires. In Askr for the New Year with enticing visions of broken resolutions.

Plumeria is illustrated in the trading card game Fire Emblem Cipher with the following cards: 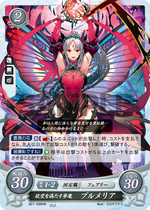 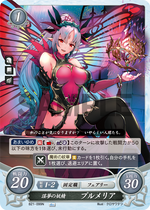 Plumeria are a flowering tree that grows in many places around the world. While it has many symbolic meanings, in Southeast Asian countries like the Philippines or Indonesia, the flower is associated with ghosts and cemeteries. In the Maya civilization, it has been strongly related with life and fertility.