The Poleaxe (localised as Halberd in The Blazing Blade and The Sacred Stones) is an Axe that appears in several titles across the Fire Emblem Series. This axe's most notable characteristic is its ability to inflict effective damage to cavalry units. In light of the abundance of cavalry units across the series, the Poleax is thus considered to be extremely useful for both the player and the enemy.

Berwick Saga features the same Horse Killing Poleax weapon, which directly deals damage to the rider's horse. The Poleax is not to be confused with the Halberd, a spear type weapon.

This axe precedes the Iron, Steel and Silver line of axes that is introduced in Radiant Dawn, which act as the axe equivalent of blades and do not deal effective damage to cavalry.

Artwork of the Poleaxe from TearRing Saga: Utna Heroes Saga. 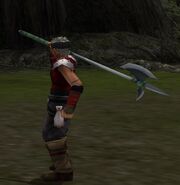