Caesar and Radd (Gained at beginning of Chapter)
Roger (Enemy, talk to with Caeda, Not FE3)

Chapter script
[view]
“The League had reached Akaneian soil, so Marth gave them leave to recuperate in Port Warren, a harbor town known for commerce. Coin alone kept the town free. They paid Doluna dearly in taxes to preserve their autonomy. Naturally, then, theirs was a warm welcome when the Akaneian League arrived. Marth's soldiers were glad to rest there, nestled between mountain and sea, but their joy was spoiled by news that the enemy was fast approaching - as harsh an awakening as a rock beneath the pillow.”
—Opening Narration

Port Warren (Coastal Skirmish in the European version) is Chapter 8 of Fire Emblem: Shadow Dragon and the Blade of Light and its remake, along with Fire Emblem: Mystery of the Emblem (Book 1).

There are three units that can be recruited:

Be careful with low defense units in this chapter. If you happen to still have Lena's Warp staff, it may be useful to quickly warp your units over to Kannival in the east. Also, if Draug has a high defense, and/or Sedgar has been reclassed as a General, unequip them and put them as road blocks to wear down the enemy's weapons, then have your weaker units finish them.

This is also the first chapter where you can grind for infinite EXP via the arena, as this is the first chapter with a shop selling the heal staff and having an arena. This is especially helpful if your healers require some help in the EXP department. 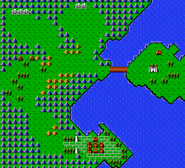