Jamieson Price
[view]
“Interesting. But I've little interest in following someone else's orders. ...Unless they're handed down by a man who can fight for himself.”
—Priam in Paralogue 23

Priam is a playable character from Fire Emblem Awakening, and the last SpotPass character that is able to be recruited.

Priam does not appear at all during the main storyline, unlike previous characters recruited through Paralogues. He claims to be the descendant of the Radiant Hero and possesses Ragnell, implying that he is descended from Ike and even wears a similar headband.

In Paralogue 23, Chrom and Robin investigate rumors of a village that houses a descendant of the Radiant Hero. Knowing the legend of this man, Chrom comes to the Garden of Giants, where he encounters Priam. Chrom attempts to recruit Priam, but he declines his initial offer. Priam states that he will join if Chrom can prove that he can fight for himself and battles his army with his band of soldiers.

Priam and his mercenaries are eventually defeated by Chrom's army. Impressed with his skills, Priam honors his deal and joins the army. Before he is able to do so, a soldier stops him and asks him for one final fight. Priam accepts the soldier's request, but later decides to change it and have one final fight with his group.

After the war, Priam vanishes without a trace. Rumors continue to debate whether he lived a life of peaceful solitude or to another continent in his quest for power.

Priam has a great sense of fighting and trains vigorously, albeit in an excessive way. He has a "training regimen" for everything; making weapons, utilizing chi, and even eating. At a young age, he went for his first training regimen and was attacked by a bear. He states that he was able to win due to the energies in the forest that helped him prevail.

He also gets along well with friends and worthy opponents. Walhart claims that Priam gives a "crackling" aura of sorts in his conversation with him during the Hot-Spring Scramble DLC. Priam also notes Walhart's aura, stating that it "chokes anything unworthy out of existence". The DLC also reveals they are eager to fight each other, but are unable to do so as their allies continually request their aid. Chrom also notes that Priam treats his men as peers regardless of their origins; his group consisting of soldiers from both continents.

His conversations with Yen'fay also show that he does not like the "D-word" — defeat. He also views himself as a normal person despite Yen'fay stating otherwise. He likes meat-based cooking the most out of everyone in the army.

Priam is the descendant of Ike, and is fittingly a Hero. Curiously, he carries three skills that he normally cannot have; Lancebreaker and Swordbreaker, both of which come from the Wyvern Rider promotions, and Luna from the Great Knight class. The first two skills, paired with Axebreaker, means that Priam will be hard to hit without indirect weapons. Priam is already strong, fitting as he is the last SpotPass character recruited. His main concern is his low Resistance, though with his high stats in the others like Skill and Speed, Priam should perform just fine. If health is an issue, he has Sol in his skill bank to help replenish lost health.

Priam's base class is the Mercenary, so he can slide immediately into the Bow Knight class if Bowbreaker is desired. Priam does not start off with any Mercenary skills, so it is recommended to change to the class to give him Armsthrift and allow him to preserve the durability of forged and rare weapons.

Priam's two reclassing options are the Fighter and Myrmidon lines. All in all, Priam performs spectacularly in these physical classes. Fighter will give him Zeal to boost criticals, and Max HP +5 for some extra hit points. The Warrior promotion will give him Counter to stack damage and Rally Strength. Keep in mind that his innate breaker skills remove the effectiveness of Counter so choosing to run his three breaker skills simultaneously or Counter is best to make both skill sets optimal. Priam performs well as a Warrior, but is still better suited to be a Hero.

Priam as a Myrmidon is incredible, boosting his Skill and Speed to their maximum potential. Like his Fighter reclassing, Priam makes a perfectly capable Myrmidon, Swordmaster, and Assassin. Vantage can be useful if he is low on health, and with his Ragnell on hand, he should not have to worry from indirect enemy attacks. Astra is a good attack skill for him to use and is worth considering as much as Lethality, though the latter's low activation rate should be considered. Swordfaire gives Priam an incredible boost in physical strength, and Pass can be used for swarming strategies, but other skills may be more desirable.

Radiant Hero
Descendant of the Radiant Hero who hails from a distant village. An earnest seeker of strength. Appears in Fire Emblem Awakening.

Priam - Radiant Hero
Priam vanished like a breath on the wind. Did his pursuit of true power lead him to a quiet corner of the map? Or did he move to another continent—one where the Radiant Hero's legend held more meaning?

Priam and Robin
Many wrote of Robin's legendary exploits, but accounts of her origins and character varied. Scholars, poets, and bards agreed on one thing alone—she loved her husband, Priam, above all else.

Priam is illustrated in the trading card game Fire Emblem Cipher with the following cards: 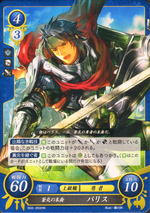 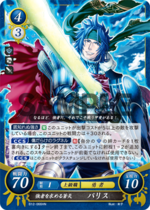 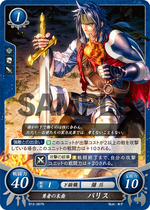 Priam is the King of Troy in Homer's 'The Iliad'.

Paris, Priam's Japanese name, was the name of Priam's son, who was the extremely selfish, cowardly prince of Troy who is brother of Hector and husband to Helen. He kidnapped Helen from her first husband Menelaus, causing the Trojan War.