The Priestess (戦巫女 Ikusa Miko, lit. Battle Shrine Maiden) is a class introduced in Fire Emblem Fates. A class that is both physical and magical, the Priestess takes on both combat and support roles. It is one of the promoted forms of the Shrine Maiden class, employing Yumi and Rods as its equipment of choice. The Priestess is treated as a Hoshidan class and is regarded as the female counterpart of the Great Master class.

In Fire Emblem Warriors, the Priestess class, called the High Priestess, acts as a clone of the Sniper class, but retains the ability to use Staffs.

As stated above, Priestesses are almost identical to War Clerics in a multitude of ways; they have well-balanced stats and are now able to use weapons in battle. They share a similar skillset, the only differences that they learn skills at a different level and that Healtouch has been replaced with Countermagic.

In addition, Priestesses use Bows rather then the axes that War Clerics use. Their well balanced stats allow them to tank if needed, however, because most bows are usually unable to attack up close (unless Point Blank is applied, or the Priestess has a Mini Bow, Sidelong Yumi or Shining Bow handy), Priestesses are better off playing a support role. They are, however, effective at taking out enemy air units, but other classes like the Kinshi Knight can perform this role better. 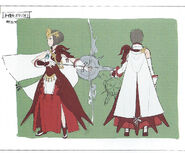 Concept art of a Priestess from Fates 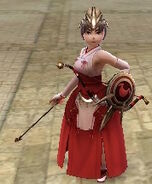 Battle model of the Priestess class. 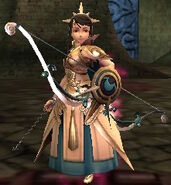