Princess (Celica only)
Enchantress(FE15 only)

The Gaiden/Echoes version of the Priestess class comes in two different forms. One version serves as the promotion for all female Mages while the other is Celica's personal starting class. Both versions of the class share the ability to wield Black Magic, White Magic, and Swords. Because of their ability to use both Magic and Swords, they are the sole class, aside from Celica's unique promotions, to have true offensive diversity, able to exploit both defensive stats when needed. The Priestess class comes with flat 50% base growths in Strength, Skill, and, Speed. In the original Gaiden, HP base growths were 100%, while they were raised to 120% in Echoes. Echoes gave slight differentiations between Celica's Priestess and the promotion version, with Celica having 50% Defense investments at the cost of a 0% addition to Resistance growths, while the Promotion version gives 15% to Resistance and 35% to Defense instead.

Celica's version reappears in Fire Emblem Warriors as an infantry unit, wielding Staffs instead of White or Black magic.

Concept artwork of the Priestess class from Echoes: Shadows of Valentia.

Battle model of the Priestess class from Gaiden. 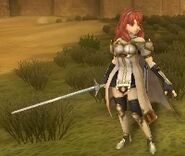 Battle model of Celica, a Priestess from Echoes: Shadows of Valentia.

Map sprite of the Priestess class from Gaiden.