Princess (プリンセス Purinsesu) is a recurrent combat physical class that debuts in Fire Emblem Gaiden, and is commonly the class assigned to female members of royalty.

In its original inception in Gaiden, the Princess class is the promoted form of the Priestess class, and is exclusive to Celica, one of the game's two main protagonists. This version of the class is capable of wielding Swords, Black Magic and White Magic as its weapons of choice.

In Genealogy of the Holy War, the Princess class is exclusive to Lachesis, wielding Swords and Staves as its equipment of choice. Originally playing the primary role of a support class through healing Staves, the class, much like its male counterpart, truly shines when promoted into the formidable Master Knight class.

In TearRing Saga: Utna Heroes Saga, the Princess class is basically the dismounted Pegasus Knight class (sharing nearly the same base and max stats), exclusive to Sasha among the playable characters. This particular incarnation of the class functions similarly to the Trainee classes introduced in The Sacred Stones, having generally low stats and movement. It can promote into the Pegasus Knight class using the unique ☆Pegasus Flute item.

The class returns in Fire Emblem Warriors, again acting as Celica's promoted form. In this game, it is a clone of Marth's Lodestar class, with the added benefit of being able to use Staffs.

In Vestaria Saga: The Holy Sword of Silvanister, the Princess is exclusive to Emilia and wields Staves. It can promote into the Sphirian Princess which allows it to wield Dark Magic and Anima Magic.

Battle model of the Princess class from Gaiden. 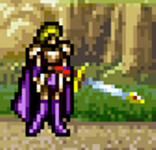 Lachesis as a Princess in Genealogy of the Holy War. 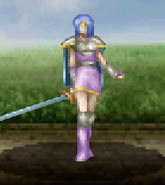 Battle model of the Princess class from TearRing Saga.

Model of Celica as a Princess from Fire Emblem Warriors.

Map sprite of the Princess class from Gaiden

Map sprite of the Princess class from TearRing Saga