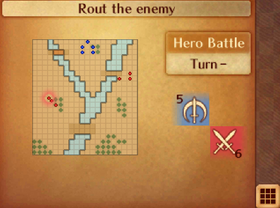 Chapter script
[view]
“Lucina, a traveler from another world, has called Corrin to meet her in battle. She hopes to test the bonds of friendship on the battlefield!”
—Introductory blurb.

After visiting Corrin's My Castle three times, Lucina wishes to test Corrin's prowess in battle. The future princess of Ylisse, Lucina awaits you in battle!

This map is pretty easy and fast, there will be 6 enemies. On the left will be Lucina (she is a Great Lord with 15 levels, her abilities will boost damage of her allies within 2 squares or give +3 damage to the one ally she is backing up, her weapon is the Parallel Falchion that is effective vs dragons) paired with a Sky Knight (that has a Guard Naginata and Silver Naginata but this one is no equipped at the start but has high damage), and a Wyvern Rider (that has Silver Axe and a Killer Axe that isn't equipped at the start but will change it when possible, the weapon has high damage and critical chance). While on the right will be a Dark Mage (has a Ragnarok) a Mercenary (has a Steel Sword and a Wakizashi) and a Samurai (with a Silver Katana and a Practice Katana).

You should start with the enemies on the right, beating them as fast as possible while trying to avoid the Wyvern and Pegasus. Once deal with the 3 at the right, go and attack the fliers before they can change weapons. Lucina should be dealt alone when she can't buff anyone or if she become the active of her pair so she can't buff the damage of her allies.

Note: This is for the Hard version of the game, other difficulties can change this.