Marcella Lentz-Pope
[view]
“I am still a child -- So allow me one more childish wish of you. Please, let me stand here, by your side. Don’t make me suffer in loneliness again.”
—Priscilla to Raven in a support conversation

Priscilla is a playable character in Fire Emblem: The Blazing Blade. She is a Troubadour born in the Cornwell clan of Ostia, who was adopted by Count Caerleon of Etruria when she was only six years old.

In the events following the destruction of House Cornwell by the corruption of Ostia, she was adopted by Count Caerleon of Etruria and lived her life in nobility. She often thought of her older brother, Raymond, who was separated from her in the aftermath of the destruction.

Apparently, she was quite oblivious to the details about her origins (likely because of her youth, and it is also possible that the Caerleons hid them from her), but when she heard rumors of the destruction of House Cornwell and the possible survival of her brother, she quickly arranged to set off. Count Pent Reglay of Etruria assigned his pupil, a Mage known as Erk, as her bodyguard. They set off, but were deterred in Laus as the marquess of the land, Lord Darin, learned of her and tried to marry her. After being rejected, Darin, in rage, leaves guards to imprison her in Laus until she agrees to marry him.

After a few days of deliberation, Erk leaves the village and travels north to seek aid from other Laus villagers, inadvertently leaving the princess vulnerable to attack from pirates to the east. They are both saved from Erik's cavalry by Eliwood's and Hector's army, which happened to be visiting Laus to confront the marquess about the disappearance of Marquess Pherae, Lord Elbert. Priscilla decides to join their group to keep her protection and to search for her brother.

Later, when storming Castle Caelin to rescue Lyn's grandfather, Priscilla encounters a notable Mercenary bearing a great resemblance to herself. With her discovering her long-lost brother, she weeps with joy only to be met with a cold rebuttal from him. His thoughts of not joining the army are quickly evaporated when Raymond learns of one of the Lords in the group, Hector of Ostia. Finding an ample target to exact his revenge on Ostia, Raymond joins, coldly reminding his sister that he is known as Raven now.

Priscilla travels with the party for the rest of the journey, either helping Raven make amends with his checkered past with Ostia, befriending Raven's retainer Lucius, learning about the truth of House Cornwell via their former vassal Oswin, or developing feelings for her bodyguard Erk, the wandering Myrmidon Guy, the Wyvern Rider Heath, or the Caelin Cavalier Sain.

Despite her royal connections, it is unknown if she was involved with the war with Bern.

Priscilla is shown to be extremely polite and a bit feminine. While she can be fairly selfless, she can also be naïve and stubborn at times, much to the chagrin of those who care about her. Although she is able to develop romantic feelings in multiple supports, three of her lovers, Guy, Heath, and Sain, are unable to be paired with her as their differences are too great, so her endings with them are those of tragic love. However, in her ending with Erk, he manages to wed her due to his connections to Pent.

Description: A vassal in service to Count Caerleon of Etruria.

Priscilla is among the most versatile units in The Blazing Blade. Troubadour is a very useful class with high mobility, staves, rescuing potential, and access to easy to use 1-2 range weaponry upon promotion. Priscilla possesses a higher Staff rank at base than her main competition, Serra, as well as higher bases, most importantly in Magic which aids in her staff range, aided by her mounted movement. Priscilla can abuse the Barrier staff to raise her Staff rank to wield staves such as Sleep, Rescue, Berserk, Silence, and Warp. She can also rescue allies closer to the front lines, if she is not needed to heal, or ferrying is needed. Once Priscilla promotes and gains access to Anima, she can be a good combat unit considering her high mobility and the overall lower Resistance among enemy units thanks to her decent speed/magic bases and growths.

Priscilla's biggest issue is her rather low starting level, especially since she can't be trained in Lyn's Story as other magic users who also join at a lower level. Since being a staff user also means that she'll only gain experience during player phase, this means she might not be capable of reaching level 10 as fast as your other magic users and cannot promote as early as you want her to. Her low durability can be a problem as well if you want her to face enemies after promotion; luckily, her good avoid and the fact that you'll face more magic users later on who do very little damage to her help her in this regard. Once Priscilla is promoted, players should also take care to avoid having her reach an S Rank in staves; there are no S-Ranked staves for the player to use, so an S Rank will only hurt Priscilla by locking her out of achieving an S Rank in Anima.

As a sidenote, Assassins, Valkyries, and Female Bishops in The Blazing Blade have boosted Experience gain from killing enemies. As Priscilla is a Valkyrie, she will benefit from this effect, which is convenient since the habitual low rank staves (Heal, Mend) yield Priscilla very few Experience points per use after promoting.

“Raymond, my brother... I wanted only one more...”
—Death Quote
“I don't want to lose anyone, so I'll fight my strongest.”
—Final Chapter Quote

Priscilla returned to Etruria's Count Caerleon. Her adopted parents met her not with harsh rebukes, but with tears of joy.

They fell in love amidst conflict, but Priscilla was a noble and Guy was but a mercenary nomad. Guy rode way before her tears could stain the earth, but Priscilla's bright smile remained in Guy's memory forever.

They fell in love amidst conflict, but Priscilla was a noble and Heath was a deserter from Bern. Their differences were too great. When they parted, Heath told a weeping Priscilla he would someday return.

They fell in love amidst conflict. Though he was not nobly born, Erk’s talent and link to Lord Pent earned him the peerage he needed to wed Priscilla. As a trusted magic teacher, he lived his life in happiness.

Priscilla is illustrated in the trading card game Fire Emblem Cipher with the following cards: 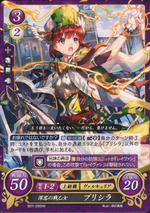 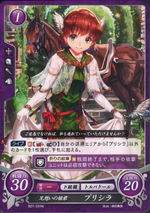 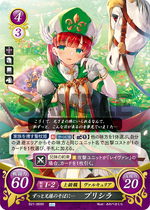 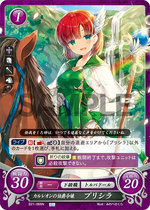 'Priscilla' is a diminutive of 'prisca,' which means 'ancient' in Latin. In the Bible, Priscilla is one of the earliest Christians; she had traveled with her husband (Aquila) on one of Saint Paul's journeys to spread Christianity, and to strengthen the churches.