Chrom and Lucina are playable characters that function as a pair unit. When deployed on the battlefield, they always act as a pair and work together in battle to attack the enemy. By default, they bear their appearances as Lords and wield the Falchion and Parallel Falchion. Their attacks and combinations make other references to Awakening, as well. Examples include an attack that temporarily sees Lucina class change into a Bride, and a combo attack finisher in which Chrom and Lucina are posed as they are on the box art for Awakening.

Tiki also appears in the game as her older self from Awakening. She is not playable, but is an event character that plays a minor role in the story. 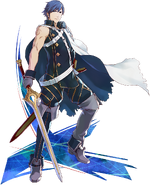