A prologue consisting of four parts has been added in Fire Emblem: Shadow Dragon. It chronicles the fall of the kingdom of Altea, prior to Prince Marth's departure to the island of Talys where he appears to be in Chapter 1: 'Marth Embarks' (and the beginning of Fire Emblem: Shadow Dragon and the Blade of Light and Fire Emblem: Mystery of the Emblem). This set of scenarios is only available in Normal Mode, however, and will automatically be skipped should the player choose to play the Hard Mode, automatically selecting the canon course of events (Not killing Gordin, using Frey as the decoy and not recruiting Norne) in that case.

The basics of combat are explained throughout the prologue if the player opts to enable the in-game tutorial. Also, two of the Shadow Dragon exclusive characters, Frey and Norne, can only be recruited in the prologue chapter, although the former is not canonically present in the main game.

Chapter script
[view]
“I will not yield to you or any other nation, here on my own land, under my own castle roof!”
—Marth to Gra soldiers

At the dead of night, Prince Marth is shocked to find himself surrounded by Gra soldiers in his own castle's corridor. He soon learns of his father's defeat at the hands of Gra, his own allies, and is implored by his sister, Princess Elice, to flee the fallen castle ahead of her.

Chapter script
[view]
“Malledus. I am not suggesting. I am commanding.”
—Elice to Malledus

Marth is joined by two Altean cavaliers, Frey and Abel. Together, they head towards the gate to meet up with Sir Jagen, and the cavalier Cain who had accompanied the fallen king's entourage on that fateful day. Meanwhile, Elice orders Malledus to catch up with the young prince and accompany him as his advisor. 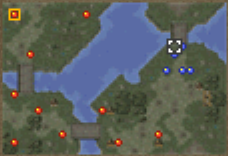 Chapter script
[view]
“This indignity is too much to bear! One day I will repay them in kind. I will avenge the fallen... I swear it!”
—Cain

"Thus Prince Marth escaped Altea Castle with Sir Jagen and company at his side. However, this success would mean little to him once he learned the cost.
The boy's woes were just beginning."

Cain delivers to Marth the king's final request: Marth must rise as Falchion's remaining heir and restore peace to the continent of Archanea. After a brief skirmish with Gra soldiers, Malledus arrives to join Marth (as a NPC) and explains to him Elice's decision to stay behind to ensure the boy's safety. She, too, believes that only Marth can save the land. 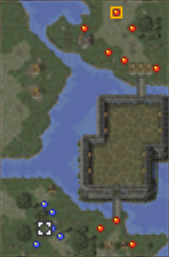 Chapter script
[view]
“Get ahold of yourself, Sire! I know how you grieve, but the Gra host that pursues us will not be interested.”
—Malledus to Marth

"Marth and his knights took refuge in a forest near Altea's borders, lying low while they waited for the right chance to escape the kingdom. Before long, the enemy grew less watchful: the time to slip away had come.
Still, the prince could not quell the sadness in his heart for his sister Elice."

Malledus tells Marth that Elice wanted him to seek refuge in the island of Talys, and so they must pass by a prison in order to reach the docks. At the prison, Marth meets the Altean archer, Gordin, who was being held captive and forced to dress up as one of Gra's soldiers. Before the group manages to make it to the docks, however, they find themselves surrounded by Gra forces from all sides, one of them led by King Jiol of Gra himself. At this point, Malledus suggests sending out one of Marth's knights as a decoy to mislead Jiol's troops, if Marth is to have any chance of survival. Despite Marth's protests, one of the five Altean units volunteers to carry out Malledus's plan and thus supposedly perishes after fulfilling the task. (Canonically, Frey sacrifices himself but ultimately survives.)

If Marth rushes to the marked fortress instead of sending a decoy, the northern door will not be opened unless all of his allies are killed.

An alternative scenario occurs if Marth actually mistakes Gordin for an enemy and kills him off. In that case, Jiol's troops will not show up, and instead, the enemy Captain will have the door opened to lure Marth out and finish him off himself.