Leader of a Group of Bandits

Fighter
[view]
“Listen up, you louts! This town is nothin' but idiot kids and drooling graybeards. Steal everything you can!”
—Pugo

Pugo (ブーゴ Būgo) is a boss character from Fire Emblem: Radiant Dawn. He is a bandit from Daein, and the first boss encountered in the entire game.

Pugo appears in Prologue Part 1, leading a group of bandits to steal everything they can from the villagers. With the Begnion Occupational Army paying no mind to help Daein after the damages they've caused in the previous war, Pugo and his bandit gang uses this opportunity to raid the villages as they please. Micaiah and her friends cannot stand this banditry and come to aid the villagers and permanently put an end to Pugo's ambitions.

Despite being a character only speaking a few lines when he appears, one can still notice several aspects of Pugo's personality. For one, being cruel and greedy, wanting everything he can desire in order to achieve his goal in obtaining gold despite the damages Daein has suffered. Pugo is also shown to target the weak, in which, knowing that the area he raided was resided with nothing but children and old timers living in the buildings, allowing him to take their belongings without much effort. When confronted by Micaiah, it can be hinted that he also sells maidens to earn his gold, as he mentions in his conversation against her that he'll have earned an honest penny once he's sold her off for a good price as punishment for standing up to him.

Place Edward in front of him. Make sure Edward has all his hit points, because if the Pugo hits him, he will lose a large amount of hit points. After this, during the Player Phase, Leonardo and Micaiah can assault him with ranged attacks. He isn't too difficult, as long as you stick to this strategy.

Pugo: Who do you think you are, the Dawn Brigade?

Pugo: You give proper thieves a bad name. Hah! You like charity? Come closer! I'll show you some charity!
Micaiah: These people work hard to feed their families mere scraps. Then you come along and steal what little they've earned.
Pugo: Shut up, kid! I work hard, too! You want honest? Once I've sold you, I'll have earned an honest penny! 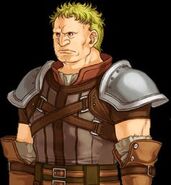 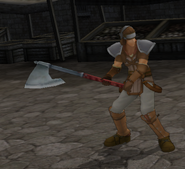 Pugo's battle model as a Fighter in Radiant Dawn.