Captain of a vigilante group

Doug Erholtz
[view]
“Look, I'm not like other folks. I don't like chasing wildly after some dream. Dream's don't fill the belly, and they sure don't pay for life's other comforts. So you know what? I'm happier without 'em.”
—Python to Forsyth in Shadows of Valentia

Python is a playable character from Fire Emblem Gaiden and its remake, Fire Emblem Echoes: Shadows of Valentia. He is Forsyth's childhood friend.

Born in a local town, Python is the son of a talented carpenter, but his alcoholism drove Python to leave his house in disgust and live a hand-to-mouth life, only to drop that lifestyle when encouraged by his childhood friend Forsyth to join the army. As a member of the Deliverance he guards the Deliverance camp headquarters, and works directly under Clive.

After the war, he became the captain of a vigilante group and protected villages from bandits. If Forsyth dies, Python serves as a royal knight with the same fervor his friend had, only to die while fighting to suppress a rebellion.

In contrast to Forsyth, Python tends to view the world from a cynical angle and leans towards a more laid back stance on life. This often gets him in trouble with the other Deliverance members, who consider him lazy and apathetic. However, in his supports with Clive, he explains that his attitude is due to the army needing someone like him who is approachable, as the others are far too serious and intimidating to the new recruits.

He is also convinced that even if he acts out of idealism alone, it won't get him very far, and only puts in as much effort as he needs to, as he explains to Forsyth. Though with a more practical mindset, he can be surprisingly serious and performs his duties with diligence, as his endings implies Python could easily attain great rank in the army if he wanted, but never does so due to his lack of interest. Interestingly enough, he does get worked up over hearing about love affairs whenever he gets word of juicy gossip, leading to him getting reprimanded by Lukas on several occasions.

Keenly aware of the social disparity between nobles and commoners like himself, he doesn't mince words when it comes to that topic, calling out on Clive about his ideology when he can't claim to understand what poverty is like and that he doesn't really support equality if he also supports the rigid class structure that gives one side more privilege.

The player first meets Python at the entrance of the Deliverance Hideout, but must fight your way though the army of the undead within the building to talk with Clive and Forsyth first. On your way out, if you talk to Python again, he will join you.

Python is a glass cannon. He is the only Archer you can recruit in Alm's route unless you promote one of the Villagers to Archer. Archers in Gaiden are great units since they can not only shoot 3 spaces away (or 5 with a weapon equipped), but they can counterattack units next to them or at their max distance. The good news is that Python has high Strength and will be able to dish out huge physical damage from far away. The bad news is that his Speed starts out very low and his Speed growth is average, which means it is doubtful that he will be Double Attacking often which hurts his offensive capability. If Python were just a little faster, he would be one of the most dangerous units. As it is, he still makes up a solid part of the team and will round out your team well as long as you keep him well protected.

The only other non-Villager Archer in the game, Leon, is not as good as Python. Leon has significantly lower Strength and even worse Speed. He has better Defense and HP, but this is not very useful as Archer is mostly a ranged offensive class that should not be getting physically hit or counterattacked that often.

* DLC class; access with the Altar of the Marksman.

Python's offensive role has not changed much in Shadows of Valentia, still retaining a solid strength growth to supplement his excellent range as an archer. However, Python's speed growth is significantly higher in Echoes, allowing him to gain more speed more quickly. However, even with this growth, Python's base speed is very low for someone at his level. Even after promoting into a Sniper Python's speed may not be good enough to double attack many enemies due to how low his base is, though ultimately that can be partially alleviated by leveling him up an additional 3-4 levels before he promotes into a Sniper.

Regardless, as an Archer, Python's main selling point is his high strength, though his speed can also be very good if he is leveled a fair amount before he promotes into either a Sniper or Bow Knight. However, one thing Python will suffer from is bad skill; terrain in Echoes tends to be common and often rewards very large avoid bonuses, meaning Python will often have difficulties hitting things without using weapon skills from Bows, which prohibit him from double attacking. Despite this, Python's strengths are very valuable as an Archer, as his solid strength base and growth allows him to be very effective at exploiting the incredibly solid range of Bows, especially when he has a non-default one equipped.

Apathetic Archer
An archer with the Deliverance. His nonchalant exterior belies a serious character that cares deeply for his allies. Appears in Fire Emblem Echoes: Shadows of Valentia.

"In order to protect villages from plundering bandits, he put all his effort into serving as the captain of a vigilante group."

(If Forsyth lives)
While the One Kingdom offered him a knighthood, Python chose a quieter life as head of a frontier militia that defended villages and towns from brigands. His old friend would visit now and then, often with a bottle the two would use to while the night away.

(If Forsyth dies)
Python accepted a knighthood from the One Kingdom, growing into a new man who worked diligently—almost as if possessed by Forsyth. Sadly, he died a few short years later while fighting to suppress a rebellion, his wounds claiming him while he was far too young.

Python is illustrated in the trading card game with the following cards: 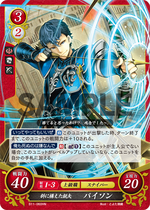 In Greek Mythology, Python was a draconic, serpent-like creature belonging to the Oracle of Delphi.