Chris Hackney
[view]
“In a war of justice there is no loser. My father wants us to give this battle all we’ve got. Ethlyn, don’t worry. I have the Gáe Bolg with me. I’m not going to fall with this at my side.”
—Quan to Ethlyn in Genealogy of the Holy War

Quan is a playable character from Fire Emblem: Genealogy of the Holy War. He is the son of King Calf and Queen Alfiona of Leonster. He is the husband of Ethlyn and therefore the brother-in-law of Sigurd. He is also the father of Altena and Leif. Being a direct descendant of Crusader Njörun, he has the ability to wield the Gáe Bolg. His life-long dream is to unite the war-torn Thracia Peninsula into one nation.

Through the blood of Njorun, Quan is a distant relative to Travant and Arion due to Njorun and Dainn being siblings.

Prior to the storyline, Quan trained at the Royal Academy of Belhalla alongside Sigurd and Eldigan. During that time, the three of them became close friends and vowed to always aid each other in times of trouble.

At the beginning of the game, Quan and Ethlyn hear about the war between Grannvale and Verdane and rush to Sigurd's aid with Finn in tow. During Chapter 1, Quan tutors Finn, whom he strongly trusts, despite his lack of experience. He also meets Ayra and learns that her father, King Mananan of Isaach, is not responsible for the invasion of Darna. During Chapter 2, Quan gives the Brave Lance to Finn, which later becomes the latter's personal weapon in Fire Emblem: Thracia 776. Near the end of Chapter 3, Quan receives the Gáe Bolg from Ethlyn, who held onto it earlier without giving it to him because she heard about its curse. However, he does not seem to believe in the curse and expresses confidence with the Gáe Bolg in his possession. After hiding in Silesse with Sigurd for one year, Quan leaves his army alongside Ethlyn and Finn to bring back reinforcements.

Quan and Ethlyn appear once again when travel through the Aed Desert to reunite with Sigurd. Despite Quan's opposition, Ethlyn brings along a three-year-old Altena. When he discovers that they are being followed by King Travant of Thracia and his Dragon Knights, he tells Ethlyn to escape with their young daughter, but she refuses and instead gives him hope that they can win the battle. If Ethlyn dies first, Quan will be forced to surrender the Gáe Bolg to Travant once he uses Altena as a hostage. Whether or not this occurs, he will perish in the battle, which later becomes known as the Aed Massacre.

Similarly to Eldigan and Sigurd, Quan is a proud descendant of the Crusaders and believes that his ancestry will lead the way to victory. Compared to his friends, however, Quan reacts more calmly to bad news for the most part and tries to quickly improvise with new strategies for whatever situation he finds himself in. Thus early on in the game, he appears to be fairly level-headed, but he begins to panic as things come to a head in Chapter 5, especially when he finds out that Ethlyn brought Altena with her. Quan also knows when he's been defeated, as he accepts his loss to the Thracian Dragon Knights during the Aed Massacre, resigning to protect his daughter until his dying breath.

Quan's level-headed and more straight-laced demeanour in comparison with Sigurd is also highlighted through his interest in the political strife between Grannvale and Isaach. In his Chapter 1 conversation with Ayra, Quan approaches her in an attempt to uncover Mananan's true motives for attacking Darna, and as a result learns partially of the dark schemes underway in the background of the first generation of the game, although not enough to avoid his eventual fate.

Quan is shown at times to put a great amount of value in friendships and familial bonds; this is made apparent immediately as he is first seen rushing to Sigurd's aid in the Prologue despite his country being at war. His marriage to Ethlyn solidifies his friendship with Sigurd, a friendship of which he is extremely proud to have. He also closely tutors Finn with the lance, although it is not made clear if he is aware that Finn would eventually become his son's protector.

Quan is a very strong Pre-Promoted unit, starting out with good stats across the board (other than Luck) and a very impressive 16 Strength. He is quite useful at weakening enemy units for your other units to finish off. While Quan does have the Adept skill, the heavy weight of his Lances will only give him a roughly 20-35% chance to activate it depending on his Speed stat, making it unreliable. However, if he does activate it, he is strong enough that he will probably kill almost anything he attacks. On top of his potential hard hitting offense, he has respectable Defense. His Njörun Holy Blood ensures solid growths in the most important stats as well as allowing him the use of any lance in the game other than Gungnir.

Quan, like Finn, may initially be a bit awkward to use as the Prologue and Chapter 1 are full of Axe wielding units that will have a much higher chance of hitting Quan than many of your other units. His durability should be enough to sustain several blows, but caution should still be taken early on.

If you really want to make Quan truly brutal, you can give him Arden's Pursuit Ring, but this is not necessarily advisable since Quan will leave at the end of Chapter 3 and the Pursuit Ring will not appear again until very late in the second generation on his daughter, Altena. He can borrow Finn's Brave Lance if the player desires, which will be similarly effective, even if it negates his Adept skill.

In the Prologue, Quan may speak to Sigurd, but nothing will result of it.

In Chapter 2, after Hierhein Castle is captured, Quan may speak to Finn, resulting in Finn receiving the Brave Lance.

In Chapter 3, after Silvail Castle is captured, Ethlyn may speak to Quan, resulting in him receiving the Gáe Bolg.

Quan is in love with Ethlyn by default, and thus does not possess any love growths with any other character in the game.

Unlike most fathers, his daughter Altena is his primary child, and thus she will inherit his inventory and her stats and growths will come primarily from him rather than Ethlyn.

Luminous Lancer
Prince of Leonster and inheritor of the lance Gáe Bolg. Husband of Ethlyn, the younger sister of his close friend Sigurd. Appears in Fire Emblem: Genealogy of the Holy War.

Lightfoot Prince
Prince of Leonster. Gallantly taking part in the dance festival is part of his royal duty. Appears in Fire Emblem: Genealogy of the Holy War.

“Die! You hyenas! As long as I have the Gáe Bolg, I will not lose to your kind.”
—Quan's battle quote, as a NPC when fighting Travant's troops in the Yied Massacre
“Quan: Urgh... What have I...
Ethlyn: Quan! Are you okay? I hate to run on my brother, but we must get you home to recover.
Quan: Sorry, Ethlyn...”
—Quan's retreat quote
“Damn... this is it.”
—Quan as a NPC after Ethlyn is killed in the Yied Massacre
“Ethlyn... I'm sorry. Finn... Look after Leif...”
—Quan's death quote as a NPC during the Yied Massacre

Quan is illustrated in the trading card game with the following cards: 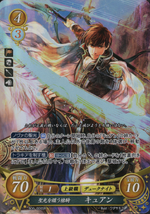 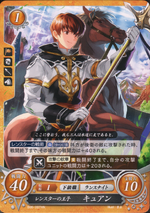 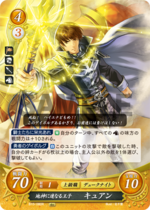 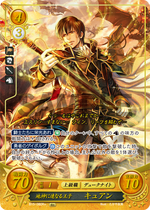 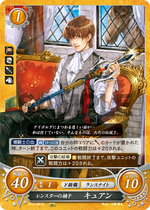 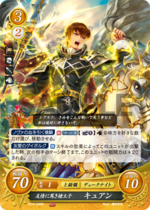 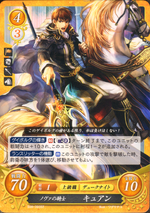 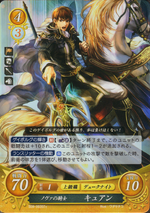 Cian was the father of Lugh in Irish mythology. His partner was Ethniu (Ethlyn).

The name 'Quan' is Irish and is the reduced Anglicized form of Gaelic Ó Cúáin ‘descendant of Cúán’. Cúán’ is also an Irish name, and means "little wolf" or "little hound". Quan is also Chinese for "all".