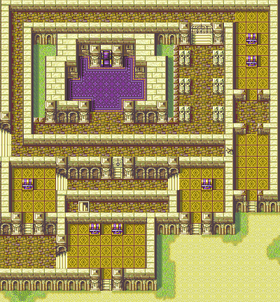 Chapter script
[view]
“Thanks to the arrival of reinforcements from Princess L’Arachel of Rausten, Eirika and her allies successfully repel the Grado invaders. Still, Jehanna Hall remains under siege, on the edge of ruin. En route, Eirika learns that the hall has indeed been captured by Grado. To rescue Queen Ismaire and recover Jehanna's Sacred Stone, Eirika leads an assault on the royal hall.”
—Opening Narration

Queen of White Dunes is Chapter 14 of Fire Emblem: The Sacred Stones when playing Eirika's route. There is a Secret Shop in this chapter located on the grassy square closest to the throne on the left hand side. To visit it, the character you send there must be holding a Member Card. Rennac, a Rogue recruitable in this chapter, holds one of the only ones in the game, so defeat or recruit him to obtain it.

You can also get a Hero Crest by entering the far right door and defeating the Myrmidon carrying it. The Priest in the northern part of the level will also drop his Mend staff; because his AI was not altered from the Japanese version, where he does not have the Mend staff, he will not drop it normally (see Trivia).