Rabbit Spirit (兎神・卯 Usagigami・Bō, lit. Rabbit God - Sign of the Rabbit) is a Scroll that is first introduced in Fire Emblem Fates. The fourth in line in Hoshido's main spell hierarchy, Rabbit Spirit is a scroll that is modelled after the fourth animal appearing in the Chinese Zodiac.

Orochi summoning a Rabbit Spirit to attack an enemy Mercenary. 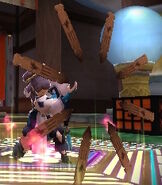