“We may not be related, but I've always thought of you as my true sister throughout these five years. You're my family, Estelle, and I want it to stay that way. Is there something wrong with that?”
—Raffin, in a conversation with Estelle

Raffin (ラフィン Rafin) is a playable character from TearRing Saga: Utna Heroes Saga. He is the adopted son of Count Merlon of Verge and a brother figure to Estelle. He was once a Dragon Knight in service to Barge. His wyvern steed is named Garuda (ガルダ).

During his time as a Dragon Knight, Raffin and Sharon were lovers. When Barge was invaded by the reborn Zoa Empire five years prior to the game's events, he broke his promise to return for Sharon and escaped alone, which resulted in them breaking up. Seeking aid, he traveled to Verge, where he was adopted by his father's close friend, Merlon. He also became a knight of Wellt and swore his loyalty to Sasha. When Estelle decided to become a knight herself, he supported her decision, despite Merlon's opposition.

Raffin is introduced alongside Merlon during their discussion about Runan. In his first scene, he scolds Estelle for teasing him about Sasha instead of training. When Runan arrives in Verge seeking aid from Merlon, Raffin and Estelle decide to help him by joining his army.

If Raffin is sent with Runan's army after the first route split, he can reunite with Sharon, who expresses her anger towards him for abandoning her. At the end of the chapter, she offers to give a Dragon Flute to him so that he can summon Garuda. If Raffin accepts the flute, he reunites with Garuda and becomes a Dragon Knight once again. He and Sharon also drink wine together to celebrate their reunion. However, if he refuses to accept it, he remains as a horseback fighter and separates from Sharon. In his conversation with Reshe in Map 21, it is revealed that the two of them once knew each other. He also receives orders from her to survive because she wants him to become one of her knight after the war ends.

If Raffin accepted the Dragon Flute from Sharon, he returns to Barge with her in the ending. However, if he did not accept it, he continues to live with Estelle and Merlon in Verge.

Raffin is a calm, collected, and serious man who seems to become uncomfortable whenever he is teased by others. He loves both Barge and Verge, which he must choose between during the game. He is protective towards Estelle and pampers her, which Merlon warns him not to do in order to avoid the other knights starting rumors about them being together.

Raffin is a unique unit in the sense that he starts out as a Commando Knight who can promote into a Dragon Knight after Map 10 is cleared. He is a powerful unit with decent bases, solid growths, and the ability to wield lances whenever the player wishes. His Luck is rather low, but his good Defense helps lessen the risk of dying from a critical hit. He is a recommended character to use, being quite good from the start and remaining solid throughout the game, with potential flying utility for a large portion of it. 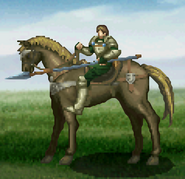