If you're looking for the similarly named Three Houses character, go here.

Vernon Dew
[view]
“Helping you would give me great joy.”
—Rafiel

Rafiel is a playable character from Fire Emblem: Radiant Dawn. He is the first prince of Serenes, the lost heron country that was crushed by the Begnion Empire. He is the only heron who is not introduced in Fire Emblem: Path of Radiance, but is the first playable in Radiant Dawn. Much like all other heron laguz, he is unable to fight, and only able to sing galdr to support other units in battle.

Half a year before the Serenes Massacre, Rafiel was captured by beorc slave-traders in Serenes Forest. He was then auctioned off to be a pet to rich and powerful beorc. Catching the eye of one particularly influential senator, Hetzel, he took him into his care and treated him with hospitality. Nursed back to health, Rafiel temporarily regained the use of his wings upon regaining his vigor. Hearing of the massacre, Rafiel fled Hetzel’s estate in a flurry of confusion and attempted to embark on a flight towards Serenes.

However, as a result of his trauma from the slave-traders, he still found himself unable to fly with his wings. He wound up flying off-course and found himself collapsed and barely alive in the infamous Desert of Death, located in eastern Begnion. Queen Nailah of Hatari had come across the heron. She brought him back to her homeland and did her best to nurse him back to health. The two eventually became lifelong partners. He then made the decision to reside in Hatari for a while, before heading towards Daein with Nailah and her loyal subject, Volug.

After the last battle of Radiant Dawn, Rafiel returns to the Serenes forest to awaken his father. If Nailah is alive by the time the game ends, he will eventually return to Hatari with her.

Unlike his siblings Reyson, who emulates his brusque protector Tibarn, and Leanne, who is rather stubborn and childish, Rafiel is more akin to how a Heron is expected to be: passive and serene. This has led Ike to comment on how he fears his shouting will injure Rafiel, whom he perceives as being "frail" and "gentle".

Rafiel keeps up a calm demeanor in almost any given situation, even when he is on the battlefield. He is mature and nurturing when dealing with others, be they Beorc, Laguz, or even Branded, the differences between them holding very little meaning to him. Rafiel is also extremely loyal to anyone whom he considers to be a dear friend of his, and is shown to willingly risk his life to help them unless they forbid him from doing so. This can be seen in Chapter 3-E, where he agrees to join Micaiah's side on the battlefield after learning of the horrific Blood Pact that she is unwillingly bound to.

Rafiel shares a strong bond with Micaiah, who comes to rely both on his Galdr and his gentle nature for emotional support. He is also very close to his partner, the Hatarian Queen Nailah, who rescued him from the harshness of the desert and continues to ensure his safety throughout his travels.

Blessed Wings
Prince of Serenes, the destroyed heron country. Fell in love with Nailah after she saved his life. Appears in Fire Emblem: Radiant Dawn.

Earthbound Chorister - Rafiel (地に在る白翼)
Rafiel preformed a ceremony in Serenes Forest to wake his father, the king. Eventually he returned to Hatari.

Rafiel is illustrated in the trading card game Fire Emblem Cipher with the following cards: 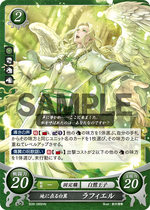 Rafiel takes his name from the Archangel Raphael. This name has multiple but similar meanings: "God Heals", "God, Please Heal" or "It is God who heals".