-
[view]
Ragnarok (ライナロック Rainarokku, also known as Rainarok) is a powerful Tome introduced in Fire Emblem Gaiden. It is the strongest Black Magic spell in its original appearance, given to the champion Zofia by the goddess Mila and only capable of being used by Zofia's descendant Celica and her pupil's descendant Delthea in the present day.

Ragnarok reappears in Fire Emblem Fates as a tome of great power and high weapon rank. Smiting enemy targets with devastating plumes of fire, Ragnarok is essentially the tome equivalent of a Silver weapon.

Although the game features no Trinity of Magic, the flavor text of Fire Emblem Three Houses classifies Ragnarok as a fire spell.

Ragnarök was the mythological Norse "apocalypse" that brought about the deaths of all the Gods and humans (Ragnarök literally means "the end of the gods"), save two humans who restart the race. It was embodied by events such as widespread fire or a great deluge. Some gods who will survive Ragnarok include Hel, Frigg, Vidar (Odin's son) and Balder who becomes the ruler of the new world. 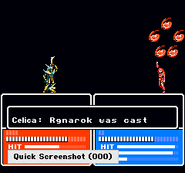 Celica casting Ragnarok on an enemy Sniper in Gaiden. 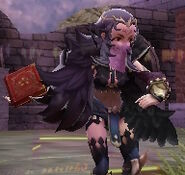 Nyx wielding the tome of Ragnarok in Fates.

Nyx casting Ragnarok on an enemy Archer in Fates.