Sam Riegel
[view]
“I want to protect those I hold dear, and destroy all those who oppose me. That's the power I seek.”
—Raigh to Niime in a support conversation in The Binding Blade

Raigh is a playable character in Fire Emblem: The Binding Blade. He is a Shaman and the younger twin brother of Lugh. He is sarcastic and cynical, the opposite of his brother. Despite his rude behavior to all the people around him, people like Lugh and Sophia say that he is really a good person at heart and is just hiding it. He is on relatively good terms with Chad despite his departure from the orphanage. His dream is to make dark magic more known throughout Elibe and to study ancient magic, joining Roy's army because it may help with his dream.

He is the second playable Dark magic user in the Fire Emblem series, following Salem.

Raigh is the son of Nino and the identical twin of Lugh. The difference in looks between the twins is their eyes. Lugh's eyes are softer like Nino's, while Raigh's eyes are harder, possibly a trait from Jaffar. He is rough around the edges, rude, and overall mordant, having been raised in an orphanage in Araphen alongside his brother and Chad. After hearing that the father was slaughtered and that Bern charred said orphanage to the ground, Raigh pretends to be standoffish to the fact and while he exclaims that he does not care what happens to the orphanage or the orphans, Lugh insists that it is merely a barrier and that he is truly lighthearted and caring by nature.

Description: A young shaman traveling to perfect his dark magic.

Speak to him in chapter twelve with either Lugh or Chad.

Raigh joins at Level 12 with tolerable bases and is the first Shaman recruited--and considering Sophia's weaknesses, he is effectively the only one until Niime arrives. Despite his status as a dark magic user, he doesn't function much differently from other tome users. He has weapon triangle over the majority of enemy magic units, but mage-to-mage battles are generally rare and not particularly desirable, so the main difference is simply his ability to heal himself with Nosferatu. Raigh suffers from some issues with his stats: his low Constitution drops his already mediocre base Speed to only 8 with Flux, and 7 with Nosferatu, meaning he will take a long time to start doubling and may risk being doubled himself on Hard, and his accuracy will stay a little on the low side until his Skill growth can kick in. Promoting him can fix some of his issues, especially when he joins possible to promote, but it also expends a Guiding Ring when these items are in very short supply until Chapter 16. Once promoted, Raigh's high Magic allows him to do some fairly nasty damage, and he gains a staff rank to heal his allies, though a low starting rank means he tends to be stuck with healing unless the player grinds heavily.

Overall, Raigh is a somewhat below-average unit, but far from an unsalvageable one. If the player lacks a strong unit capable of hitting Resistance, Raigh can be caught up without too much trouble, but if they already have strong tome-users and are having trouble finding a niche for him, he isn't so powerful or unique that he can't be missed.

Dark Child
Wielder of dark magic. A scornful loner with a troubled past as an orphan. Appears in Fire Emblem: The Binding Blade.

Raigh - Child of Darkness (闇の申し子 Yami no Mōshigo, lit. God-sent Child of Darkness)
"Raigh traveled around the world, honing his dark magic skills. Although dark magic had been all but forgotten, Raigh's efforts brought it back to people's awareness again. He was known for being hard on both himself and others, but for some reason he was generous towards deprived children."

Raigh is illustrated in the trading card game Fire Emblem Cipher with the following cards: 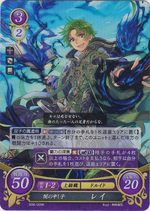 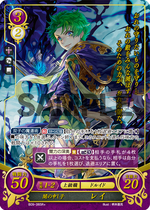 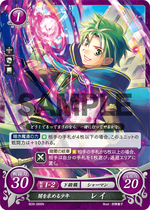 The Japanese transliteration of Raigh's name, "Lleu", comes from the Welsh mythlogical figure Lleu Llaw Gyffes, who was born when his mother, Arianrhod, was running for the door after giving birth to Dylan Ail Don during a magical virginity test and is raised by Arianrhod's brother Gwydion. When presented with the child, Arainrhod places a tynged, similar to a curse, on him that only she could name him, which Gwydion tricks her into doing, as well as later tricking her into arming him to counter a second tynged, and making a wife out of flowers to counter a third. He is considered to be the equivalent of the Irish Lugh.

The change in his name in Fire Emblem Awakening was likely due to pronunciation - The Welsh ll (ɬ) sound is very difficult to pronounce for most native English and Japanese speakers so it might have been a pragmatic choice to translate according to the Japanese pronunciation towards a variation of a common English Language name rather than try to maintain the intent and pronunciation of the original word.