The Raijinto is a Katana that debuted in Fire Emblem Fates.

The Raijinto was one of five weapons crafted by the Rainbow Sage to be used by humans in order to end the war between the First Dragons. It, alongside Siegfried, Fujin Yumi and Brynhildr, is necessary in order to unlock the full power of the Yato. After the war, the Katana was passed down through the Hoshidan royal family. Prior to the start of the series, the blade was once wielded by King Sumeragi but with his death, it was passed down. Its current wielder is Ryoma, the crown prince of Hoshido.

In the Heirs of Fate series, Shiro inherits the Raijinto from Ryoma and uses it as his main weapon. In his support with Ryoma, Shiro will eventually be trained to wield the Raijinto as Ryoma's eventual successor.

Raijin is the god of lightning, thunder, and storms in the Shinto religion and Japanese mythology. Raijin is commonly depicted in art with Fūjin, god of storms and wind, and the namesake of Takumi's Fujin Yumi.

Raijintō literally means "Thunder God Sword", which makes sense because it can summon lightning to attack the opponent. 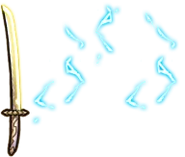 In-game model of the Raijinto from Heroes. 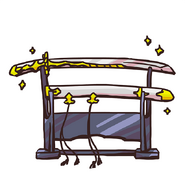