Knight
[view]
“My only interest is keeping you out of Regna Ferox, brigand!”
—Raimi

Raimi is the boss of Chapter 3 in Fire Emblem Awakening and one of the Ferox knights. After she is defeated in Chapter 3, she will take Chrom to Ferox to meet with Flavia. Despite this, she cannot be recruited.

Raimi leads a border guard platoon against all who wish to enter Ferox through The Longfort. For a while, The Longfort was constantly attack by Plegian bandits, wishing to instigate a war between Ferox and Ylisse by posing as Chrom and the Ylissean army. However most were defeated quickly and their ruse was exposed, thus no tension ever formed between Ylisse and Ferox. However, when the real Chrom and the Shepherds arrive at the Longfort to seek aid from Ferox against the Plegian army, they meet Raimi in command of the Feroxi troops garrisoned on the border wall. Because of the constant attacks by the Plegian masqueraders, Raimi does not believe that Chrom is the real deal. Though he tries to settle things peacefully, she ignores Chrom's attempts at diplomacy and tells him to prove himself in battle.

After a heated battle ending with her defeat, Raimi realizes that Chrom and the Shepherds are no pretenders. She apologizes for her actions and personally escorts the Shepherds to the Khan's arena, introducing them to Flavia.

Raimi appears two years after the end of the Plegia-Ylisse war, arriving in Ylisstol to bring news to the new Exalt of Ylisse, Chrom, of the Valmese army arriving in Ylisse to conquer the continent. Raimi escorts the Exalt to Ferox so he and Flavia can discuss how to deal with the impending invasion. 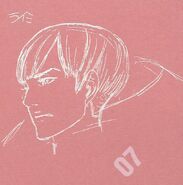