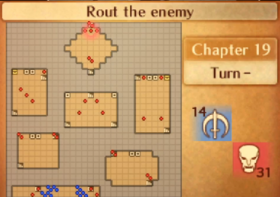 Chapter script
[view]
“With help from Leo, the group returns to Notre Sagesse. They undergo several challenges to meet the Rainbow Sage, who has already granted Xander his power.”
—Opening Narration

Rainbow Sage (虹の賢者 Niji no kenja) is Chapter 19 of Fire Emblem Fates in the Birthright Version. This chapter takes place in the Sevenfold Sanctuary.

Players must navigate through the many buildings via the staircases in each one. Traversing through a staircase does not cost any movement, but the amount of tiles you can move after using one is dependent on how far the unit(s) traveled on the way to the staircase. This means if a unit that could move six tiles was next to a staircase and used it, when they appear at the next staircases they can move five spaces away from it. Travel between staircases cannot be used if a unit is blocking the staircase.

Before starting the chapter, it is important to look at all enemy stats first. This is because these units are extremely odd compared to others found anywhere else in a typical Fire Emblem scenario.

The final room contains two pairs of Guard Stance Swordmaster/Berserker combos. The Berserkers have maximum Attack, so they are likely to kill anyone they come in contact with, but also sacrifice all but the Berserkers' base HP, so they will die almost immediately thanks to their terrible defensive ability. The Swordmasters have nearly maximum speed, making them likely to double all but other Swordmasters, but at the expense of their Skill statistic, meaning their attacks almost never connect, even when at weapon advantage. At the sides of the boss General are two stationary Spear Masters with rock bottom offensive stats but maximum HP. One wields a Dual Naginata, the other a Bolt Naginata. The boss General has completely normal stats (for a boss General) and remains stationary as well.

All other stats each unit has are normal for their level and class, so normal strategy and warning signs are applied as need be.

After the chapter is completed, Corrin's Yato will be upgraded to the Noble Yato, increasing its stats and granting a +2 bonus to Strength and Speed as long as Corrin has the weapon in their inventory.