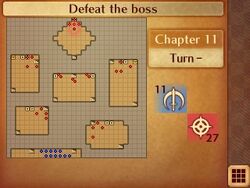 Chapter script
[view]
“Corrin and company safely arrive in Notre Sagesse, only to discover that Hoshidan forces have beaten them there.”
—Opening narration

Rainbow Sage (虹の賢者 Niji no kenja) is Chapter 11 of Fire Emblem Fates in the Conquest Version. This chapter takes place in Sevenfold Sanctuary. As with all variations of this map, this chapter is segmented into six main rooms.

Unlike the Birthright and Revelation variant of the Rainbow Sage map, the enemy units are unpromoted.

However, players should be aware of the following:

Players should check and take out enemies as quickly as possible. The middle room's units have different skills, however. The two paired up Samurai have both Lunge and Armored Blow, while the pair in the center both have Life and Death. The Ninja has Poison Strike and the Diviner has Malefic Aura.

Once this middle room is cleared, the last room left is Hinoka's room. None of the enemies, including Hinoka herself, can move. Simply defeat Hinoka, as the objective is to beat the enemy commander, although you should clear out the accompanying units for free experience before doing so.

The enemy unit in the uppermost tile (two away from Hinoka) will heal Hinoka whenever she takes damage. You can use this to grind some EXP for several of your units (especially your healers and Azura), as described below:

This is also a good way to build some support between units of your choosing.