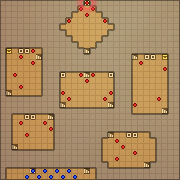 Shura (Appears as enemy on Turn 2, speak with Corrin)

Chapter script
[view]
“The group begins to climb the Sevenfold Sanctuary, hoping to meet the Rainbow Sage. They find that the road up is not an easy one.”
—Opening Narration

Rainbow Sage (虹の賢者 Niji no kenja) is Chapter 15 of Fire Emblem Fates in the Revelation path. This chapter takes place in Sevenfold Sanctuary. As with all variations of this map, this chapter is segmented into six main rooms.

Corrin and their group arrive in Notre Sagesse, and they immediately begins asking the locals about the whereabouts of the Rainbow Sage. The old man they are speaking to recognizes their sword as the Yato, and questions why they are seeking out the Rainbow Sage in the first place. The old man directs Corrin to the Sevenfold Sanctuary to find the Sage, warning them not to die on their way up the mountain. The group begins to tire on their way up the mountain, until they finally reach their destination. Corrin warns the group that actually meeting the Sage will not be an easy task; Corrin's assumption is right, as they encounter illusions who challenge them on their way to the Sage.

After completing the illusions' trial, Corrin enters the final door, which takes them back to the house where they spoke to the old man. The old man reveals himself to be the Rainbow Sage, and Corrin tells him that they are seeking out a dragon to stop the war. The Rainbow Sage first takes the Yato and unlocks its power, transforming it into the Alpha Yato. Though not fully powered, Corrin now has the means to stop Anankos. The Sage tells Corrin that they need the four divine weapons, then the Yato will be completed and become the Fire Emblem. The Rainbow Sage then collapses, prompting Corrin to urge Sakura and Elise to heal him, which the Sage advises against, saying that his time in this world has come to an end.

After mentioning "human magic" not working on him, he reveals himself to be the dragon they were searching for, one of the twelve First Dragons, and the creator of the Yato and the divine weapons, and that he could not die until he atoned for making them. The Sage finally passes away, telling Corrin to make their own destiny. Corrin thanks the Sage and directs the group to move out to the Bottomless Canyon once and for all.