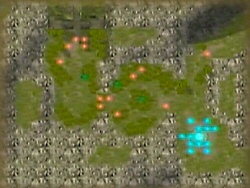 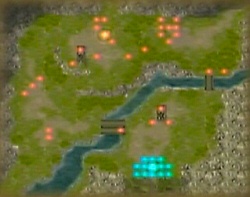 Chapter script
[view]
“Three years past, Daein mustered all of its formidable military might and cut a bloody swath through neighboring Crimea in a sudden invasion. Daein was defeated, however, and the dreams of its ruler, Mad King Ashnard, died with him. Ashnard's son, Pelleas, possesses a gentle sincerity that is a bright counterpoint to his late father's violence and duplicity. Ill-suited though he seems for these troubled times, his presence is a welcome sight to Micaiah's eyes. Pelleas, declared rightful heir to the throne, finds his name becoming a rallying cry for Daein. At his side is the only person he believes can lead his Liberation Army... the Silver-Haired Maiden.”
—Opening Narration

Raise the Standard (掲げよ旗をKakageyo hata o) is Chapter 1-6 of Fire Emblem: Radiant Dawn, composed of two Stages. It is the first chapter with Micaiah in command of the Daein Liberation Army and also the first with Jill, Tauroneo, and Zihark on your team. The battle takes place in Terin, where the commander of the Begnion forces is Laverton. During the second stage of the chapter, Laverton attempts to sacrifice village citizens to convince the Liberation Army to surrender, but Fiona and the knights of Marado rescue the children, allowing the Liberation Army to continue the battle.

You can Talk to Fiona with Micaiah, but it does not result in Fiona being recruited. However, if Fiona is defeated in battle, the player will lose the game.

The first stage of this chapter is rife with dangerous reinforcements. Sending units alone to pick off outlying enemies (such as the axe user to the north) can quickly turn disastrous if reinforcements turn up right after you've moved. Focus on luring enemies to you rather than taking the fight to them. You've got some shiny new toys in this chapter, namely Jill, Zihark, and Tauroneo, and they'll all be useful in their own way.

Tauroneo is the first unit the Dawn Brigade gets that can actually be called a proper tank, and any non-magic user will have difficulty even scratching him. However, he is wildly over-leveled and will waste experience if you use him like a normal unit. Unequp his weapon before parking him in enemy range, and use him as a lure to set up kills for your weaker units.

Zihark is a pre-promoted Swordmaster, and a fine unit in the long run. However, he starts a bit too strong to be seeing a lot of action right away and will sap experience from your less developed units. Use him sparingly. He has good movement and fantastic kill potential, being able to double almost every enemy with a naturally high critical chance, a killing edge, and Adept to boot. Keep him just behind the frontline, ready to jump on anything that you absolutely need dead.

Jill is a bit behind the other old faces, but she's right in line with the rest of the Dawn Brigade and can begin training immediately. She's the only flyer available in Micaiah's chapters and should see a great deal of action. Properly training her will pay off in spades, so don't be shy about using her. She doesn't have the strength of Tauroneo or the speed of Zihark, but her peerless mobility gives her an advantage that makes her invaluable, especially in this stage. Giving her the hammer that drops from the Armor Axe reinforcement is also a good idea, as her high strength allows her to one-shot the armor knights without requiring her to double.

The main headache in this first stage are the annoyingly mobile reinforcements that will consistently pop up on the hills overlooking the valley. They aren't particularly strong, but they can cover a ton of ground in an instant and almost all have javelins, so make sure your healers and mages are well guarded and be prepared to quickly adapt. Equipping Jill's hand axe and sending her onto the hills to contend with them may seem like the right thing to do, but Jill hasn't really hit her stride yet and won't do much more than slow them down. Leonardo sees some good use here, even if you aren't training him, as he can either seriously damage or outright kill a pegasus knight with just one shot. Ideally, you'll want to rush into the center of the area and use the thicket for cover. Once there, you can hole up and weather the onslaught of pegasus knights. Make sure to have Sothe grab the Arms Scroll on your way through.

Tauroneo has surprisingly good resistance for an armor knight, so use him to bait the mages on your approach to the gates. Be prepared for the three pegasus knights that will show up on the north hill, as they can easily gang up on any stragglers. Snag the hidden coin with Sothe and clean up the remaining enemies to finish the first stage.

You start the second stage of this lovely chapter by staring down the barrel of a ballista. If you can kill the unit to the ballista's bottom left, then Sothe's starting position allows him to charge straight forward and fillet the archer at the controls. This will expose Sothe to some additional cavalry units on harder difficulties, but they shouldn't be anything he can't survive. Use Tauroneo along with Volug (or Aran, if he's been trained) to stop up the left bridge and then make a push for the north bridge. On the first enemy phase, Fiona will see through the lies of the Jedi and turn traitor, causing her and her detachment of cavaliers to rescue the villagers and try to make a hasty escape to the south gate. The enemy will pursue, and will make quick work of your new allies if you don't intervene. The bonus experience gained for each surviving allied unit is massive, and you'll want to form a defensive line covering the north bridge as soon as possible. This will allow Fiona and her detachment to retreat behind you, as long as you leave some space for her cavaliers to move in. Expect that little one-square bridge to see a lot of traffic.

On turn 5, a large detachment of enemy cavalry will arrive, and will immediately charge you. They'll likely make for the left bridge and you'll have to pull some units from the north bridge in order to back up Tauroneo and Volug. This isn't because they can't handle it, but rather because letting those two clash with the cavalry is going to waste a ton of potential experience. Micaiah's Thani spell will vaporize any mounted unit in one shot, and Edward (if you've been training him) should be starting to pick up enough speed to be able to double them. Play your defense slowly and carefully, and mind the cavalry unit's Canto. It allows them to pile damage onto a tank and then step out of their ally's way.

Once the cavalry has been dealt with and Fiona is successfully smashing her face into the southern gate, you can finally focus on advancing to the boss. Ballista shots barely tickle Tauroneo, so park him in range of the second ballista to use up its ammo while you get the rest of your units into position. It's recommended to approach the boss from the east, as the southern approach forces you up a tight, winding hill that's locked down by powerful archers. If you're feeling cheeky, you can have Jill jump onto the northern mages from the river, dumpster them, and then canto back into safety, making the approach that much easier. Laverton isn't the most frightening boss, as like the others he can be easily dispatched with a Thani from Micaiah. If you want, you can steal either his steel lance or his javelin, and the ever useful Paragon will drop upon his death. Be sure to snag the hidden Master Seals before you finish him off.