Ram Village is a location in Fire Emblem Gaiden and its remake, Fire Emblem Echoes: Shadows of Valentia.

Ram Village is a small village that serves as the starting location of both Fire Emblem Gaiden and its remake, and is the hometown of Alm and his friends Gray, Tobin, Kliff and Faye. Located at the very southwestern edge of the continent of Valentia, its seclusion allows its residents to live in relative peace, though bandits take to calling the forest just outside the village home. The village's main export is Ram Wine.

Here, Mycen has raised his young grandson Alm in peace and secrecy, sharing his old battle techniques with the boy. One day, the soldier Lukas comes to town, hoping to recruit Mycen to the Deliverance, but Mycen refuses to comply, wanting no part in war. Alm offers himself in his grandfather's place, which Lukas eagerly accepts, and Alm's friends also tag along for their own reasons. The group, while leaving, finally rid the village of the bandit blockade that had made travel a difficulty for the villagers.

As a child, Celica also lived in Ram Village for a time. After her presence was made known to some corrupt Zofian knights, however, Mycen escorted her away to live in greater seclusion in a Priory on the island of Novis off the southeastern coast of Valentia.

Although the player can revisit the village at any time, it plays a mostly minor role. In Shadows of Valentia, there are sidequests that require returning to Ram in order to complete.

Ram Village possibly gets its name from the Latin word rāmificāt, which means branch, as the village is on the southern "branch" of the continent Valentia. 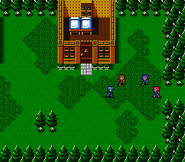 Alm with the three villagers: Gray, Tobin and Kliff, and Lukas (recruited offscreen) in Gaiden.